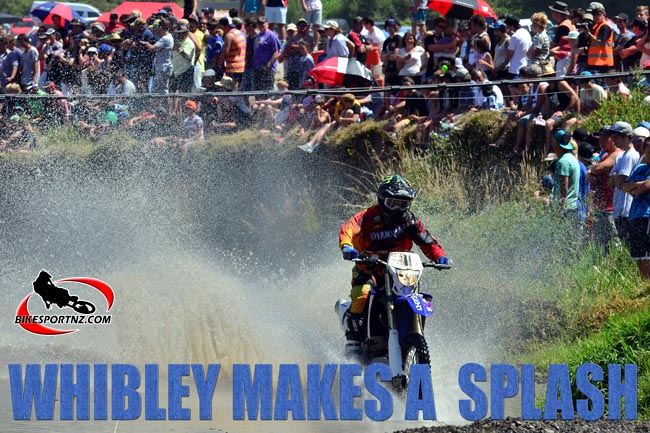 So much for having some time off.

Pahiatua’s Paul Whibley signed off on his “off-season break” with another winning ride at the weekend, dominating the river race segment of the big annual New Zealand Motocross Grand Prix at Woodville.

With back-to-back wins in the crowd-favourite races, Whibley showed why he deserved to display the number one on the front of his Yamaha, the 34-year-old simply too good for his cross-country, enduro and motocross rivals on Sunday.

Using part of the motocross track, the ‘river race’ course soon becomes more nasty and nautical rather than dry and dirty as the riders drop off the riverbank and into the water, with the bikes’ waterproofing almost as important as the riders’ skills..

“It may have looked as though I did that easily but the truth is, I nearly lost it,” Whibley admitted afterwards.

“The bike got a lung full of water and slowed for a lap while it digested the fluid. Mitch Rowe (of New Plymouth) sensed I was having issues and closed in for the kill. But, with a lap to go, the WR450F cleared its throat and I was able to hold on for the win in the final river race.

“I chose to ride a Yamaha WR450F, rather than my usual YZ450F model bike today, just for a change. It was about as enduro as you can get with working lights, a side-stand and everything.

“The bike behaved really well in the wet conditions, but I guess that’s what it’s designed to deal with, crossing rivers, creeks and mud bogs in the forest.”

Affectionately dubbed “The Axeman” on the motorcycling scene, the former Manawatu forestry worker won two major cross-country titles in the US last season, clinching the Grand National Cross-country Championships (GNCC) and the Off-Road Motorcycle and ATV (OMA) crown as well.

Whibley fully intends to defend both crowns when the two competitions kick off afresh for 2013 in just a few weeks’ time.

“I head back to my base in South Carolina this week, to get ready for the GNCC and OMA seasons.

“It seems like such a very short off-season for me and I didn’t get much time to relax this year because I ran a training camp and also organised the inaugural Yamaha Taikorea 500 race in December. But I enjoyed it and wanted to give something back to the sport.”