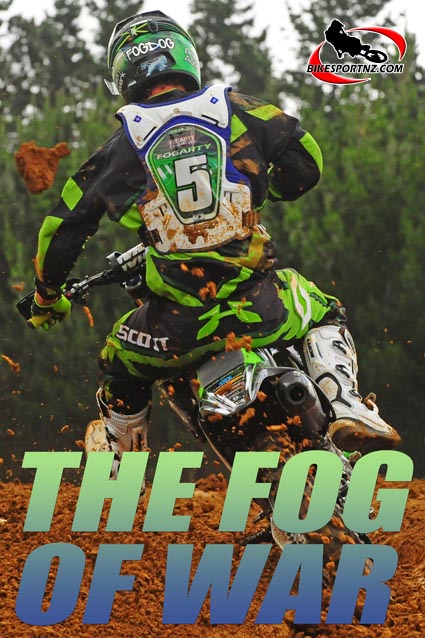 He’s already blessed with superb motorcycle racing skills, but a little extra horsepower made the job that much easier for Auckland’s Shaun Fogarty at the weekend.

Fogarty put aside his own Spectrum Kawasaki KX250F and borrowed a friend’s KX450F model bike to win the second round of three in the popular Bel Ray Cross-country Championships near Huntly at the weekend.

Fogarty had finished third at the series opener in early December, while double national champion Adrian Smith (BikesportNZ.com Yamaha YZ250) had won the day, but it was the turn for Fogarty to shine at the weekend, with Mokau’s Smith forced to accept fifth place.

National cross-country and national enduro champion Smith had been running in second spot on Sunday, until a heavy crash saw him drop back down the rankings.

So, with just one round remaining, Fogarty leads the Bel Ray Cross-country series by four points from Smith, with Dickey just a further four points back in third overall.

“Unfortunately I won’t be able to race at the final round because the date clashes with round one of the motocross nationals. But that’s really what I was using this series for, as a training tool to get my fitness up before the motocross series,” said Fogarty.

“I got a reasonable start on Sunday and dealt okay with the dust to work my way through to the front about halfway through the first lap,” he explained. “I just maintained my position from there. It was certainly interesting being on a 450cc bike. It had so much extra power and took some getting used to. But it made things easier in the end.

“I have a really good crew behind me, especially Brent Martin at Spectrum Motorcycles and Scotty Wilkins from Kawasaki New Zealand,” said Fogarty.

“I want to say a big thanks to everyone helping and to my sponsors, Precision Autowerk, Graphic Creation, Spectrum Motorcycles, Kawasaki New Zealand, Bel Ray Oils, Q Construction, Scott goggles and FMF mufflers.”

The third and final round of the Bel Ray series is again set for farmland near Huntly, on Saturday, February 9.