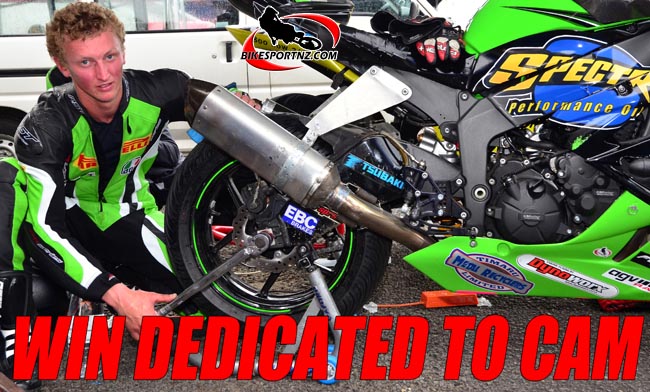 Most motorcycle road-racers yearn for clear, blue skies and a warm, dry track, but probably not Canterbury’s Seth Devereux.

Just three races into the first national 600cc Supersport campaign of his career and the young Christchurch man was celebrating his first win, a victory that came in extremely wet and hazardous conditions on Sunday.

The 2011 national 250cc class champion and 2012 national 125GP class champion had experienced a modest introduction to the 600cc class at a dry opening round of the New Zealand Superbike Championships at his home track of Ruapuna, Christchurch, just a week earlier. 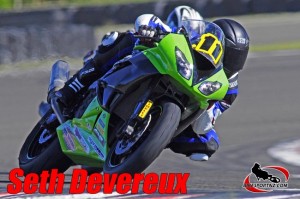 The 21-year-old bike mechanic had finished the day ranked just 13th overall in the fiercely-fought 600 Supersport class after Ruapuna, but when the rains came for the first race of the day at round two at Levels Raceway, near Timaru, on Sunday, he was in his element.

Devereux had qualified his Spectro BikesportNZ.com Kawasaki ZX6R bike in only 10th spot on the Saturday, although there were just two seconds a lap between the top 10 qualifiers, so intense has been the class this season. A wet track greeted the riders on race day Sunday and Devereux was quickly moving forward from his 10th spot on the start grid.

“I got a reasonable start and zipped past a few riders straight away. It took me two laps to get past (series leader) John Ross (of Christchurch) and into fifth place and, two laps later, I was up into second spot.

“It took me a couple of laps to get past race leader Jeremy Holmes (of Invercargill) but, after that, it was all plain sailing,” he said, eventually winning the 15-lap race by more than six seconds from Holmes.

“I’ll scratch that one up for Cam,” he said, referring to his close friend, Christchurch’s Cameron Jones, who suffered fatal injuries at the corresponding event the previous season.

“It was good to get that monkey off my back … racing a 600cc bike on the same track that claimed my mate Cam in the 600 class last year.”

The second 600cc race of the day was in the dry and still Devereux was able to defy his qualifying rank, battling in a ‘freight-train’ of bikes to finish in sixth position.

This was good enough to give Devereux overall runner-up for the day.

“That’s not bad for my second time out in this class,” said a gleeful Devereux afterwards.

“I’m really looking forward to round three at Teretonga (near Invercargill) this weekend. I’m actually praying for rain. The Kawasaki is so stable and settled in the wet.”