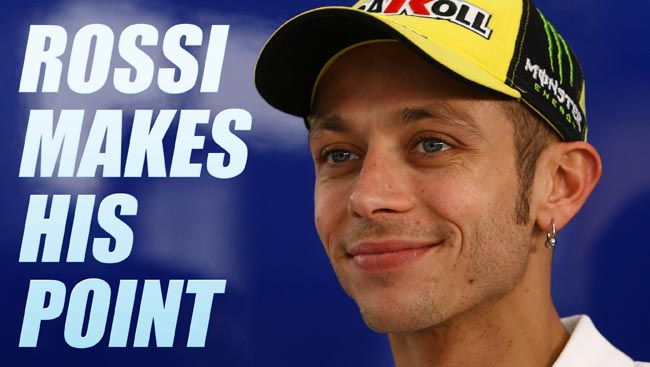 He was speaking out after the recent acquisition of the World Superbikes Championship by MotoGP promoters Dorna.

“For me it is important that the two (MotoGP and World Superbike) are different with prototype bikes in MotoGP and the normal bikes in World Superbike. Maybe now the problem is that both are too close and they have to make a step back with World Superbike and race more with the stock bike.”

Rossi believes World Superbikes needs a major technical revamp to use more production-based machinery in the future. But the nine-time world champion has urged Dorna – which now controls World Superbikes after the recent acquisition of Infront Motor Sports – not to dumb down the technical rules too much to take away the skill and fascination of riding in WSB.

Now that Dorna has control of World Superbikes, CEO Carmelo Ezpeleta said he will implement rule changes that will help reduce costs in WSB, but also help create more room for him to manoeuvre in MotoGP.

Ezpeleta says he will push through his controversial plans for a controlled ECU and rev limiters unless the factories can propose viable alternative options to help achieve his objectives of cutting costs and making racing more entertaining.

Ezpeleta said he is willing to compromise on implementing radical rule changes like a single ECU if Honda, Yamaha and Ducati can offer up a different solution to meet his targets for the future of racing in the premier class.

But he said won’t accept the factories dithering and stalling over future regulation changes and if there is no counter proposal from the Motorcycle Sport Manufacturers Association (MSMA), he won’t hesitate to introduce a controlled ECU and rev limit, despite the risk of alienating Honda, Yamaha and Ducati.

It is almost one year ago since Ezpeleta chaired crisis talks at Valencia with representatives from HRC, Yamaha and Ducati, warning them that costs had to be reduced to ensure MotoGP could ride out the economic storm created by the global financial meltdown.

But almost 12 months on and there are no concrete plans in place for how MotoGP will tackle the cost reduction issue, while also looking to tweak the rulebook to make the racing less boring and processional.

World Superbikes has edged closer and closer to the full blown prototype category that MotoGP is, and Ezpeleta believes WSB should adopt rules similar to the current Superstock format, where slightly modified production bikes are raced.

Rossi said he supports the move to reduce the level of technology in World Superbikes. And he said Dorna now controlling WSB was a positive move that should help both prosper and complement each other in the future.

“I like World Superbikes a lot and I am a fan,” said Rossi.

“When I am at home I always follow it, but I’ve been doing this for 10 years now. For me it is important that the two are different with prototype in MotoGP and the normal bikes in World Superbikes. Maybe now the problem is that both are too close and they have to make a step back with World Superbikes and race more with the stock bike.

“For World Superbike they have to understand the right level between a stock bike and now. The bike has to remain fascinating and with a good performance and not just be a street bike. This is the balance. Now Carmelo has more power with the manufacturers in MotoGP. But I think it is a positive thing. Who is in charge of deciding the rules doesn’t have to have so much pressure from the manufacturers.”

Rossi’s view is an opinion shared by International Race Teams Association boss Mike Trimby, who said during the Japanese Grand Prix: “We have always been of the opinion that there should be a clear distinction between MotoGP and World Superbikes. And what’s happened is that World Superbikes has moved closer to MotoGP by effectively running prototypes and that makes it difficult for us to make positive plans to reduce the costs in MotoGP.

“Unless costs are reduced in World Superbike as well and the technical specifications are more closely aligned with an evolution from street bikes, then we were going nowhere. That’s where we feel MotoGP should go and to do that World Superbikes has to also get its act together and return to what it was supposed to be, which is a street bike series.”