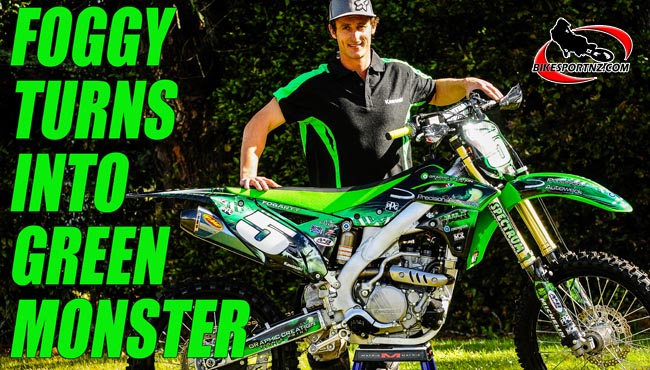 Auckland motocross ace Shaun Fogarty is now a confirmed “greenie”, joining the Kawasaki family for the new motocross season, and he’s determined to swap the No.5 on his bike for a slightly smaller number in 2013.

The 30-year-old, who works as a builder at Auckland’s Q Construction, arrived at the Auckland Motocross Championships at the weekend sporting new colours, his 2013-model Spectrum Kawasaki KX250F decked out in a fabulous “Incredible Hulk” colour scheme.

He was using the event to begin his build-up for the 2012-13 motocross season, although it was a tough day for him at the Tuakau circuit as persistent rain squalls made racing on the slick surface something of a lottery.

Fogarty finished eighth, seventh and fifth in his three MX2 (250cc) class races on Sunday – showing improvement with each session – although they were not exactly the results he was planning.

Nonetheless, he felt it was a positive start to his new season campaign, finishing the day ranked fifth overall.

“It was a bit of a rough day on the new beast. Maybe it was the ‘Hulk’ coming out,” he laughed.

“I rode a demo bike last weekend and only picked up the new KX250F during the week. I had only been on the new bike a few hours, just to run it in, and this was my first proper race on it. I have to say I felt pretty comfortable on it straight away.

“I am a lot better prepared for the nationals than I was last year and I come into the season fully fit and raring to go.

“I certainly want to finish higher up than fifth in the MX2 class this season.

“I crashed a few times today but the conditions contributed a bit to that and I know what I’m capable of. It was a little difficult getting used to racing a four-stroke after spending so much time on a two-stroke motorcycle last season.

“I have a really good crew behind me, especially Brent Martin at Spectrum Motorcycles and Scotty Wilkins from Kawasaki New Zealand.

“I want to say a big thanks to everyone helping and to my sponsors, Precision Autowerk, Graphic Creation, Spectrum Motorcycles, Kawasaki New Zealand, Bel Ray Oils, Scott goggles and FMF mufflers.”

He took his Darryl August Motorcycles KX450F to finish a close runner-up to Mangakino’s Kayne Lamont (CMR Red Bull BikesportNZ.com KTM) in the MX1 class, Saunders winning the third and final MX1 race of the day in spectacular style.