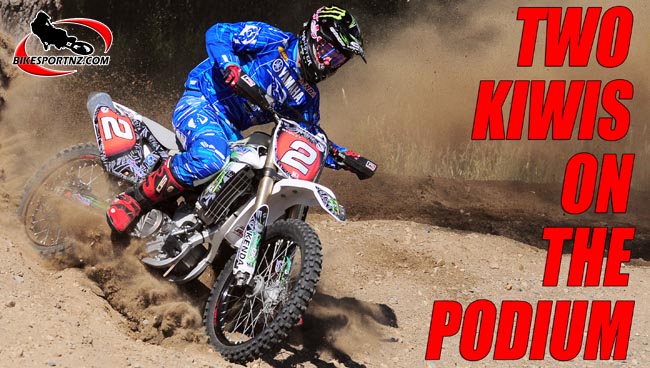 Pahiatua’s Paul Whibley is proving to be unstoppable in the United States.

The 34-year-old former Manawatu forestry worker, affectionately dubbed “The Axeman” on the motorcycling scene, raced his way to yet another victory in the United States at the weekend, despite coming under “friendly fire” from another Kiwi.

Whibley rode his Yamaha YZ450F to a comfortable victory at round 12 of the popular Mid East Hare Scramble Series, in Jonesville, South Carolina, at the weekend, with Japanese rider Takashi Koikeda and fellow New Zealander, Mokau’s Adrian Smith, in pursuit.

Smith was surprisingly quick, pushing his Yamaha YZ125 to close in on the 450cc machine of Koikeda near the end of the race.

“With thunder storms in the area the day before, everyone was expecting muddy conditions, but, as we rolled into the pits, it was evident that the rain had missed the track,” said Whibley.

“A quick look inside the woods at the trail revealed dry conditions; we would certainly stir up some dust as the racing progressed.

“I grabbed another good start and led the way. Knowing it was a bit dusty, I tried to go early and open up a gap. The earlier youth grade race had exposed plenty of roots and the trail was already quite choppy in many places.”

By the end of the first lap, Whibley had opened out a 20-second lead over American Jesse Robinson, with Koikeda not far behind him.

Whibley extended his lead until the finish and, with Robinson striking problems near the end, Koikeda and Smith were able to take second and third.

Smith rode a Yamaha YZ250F to win the New Zealand Enduro Championships outright near Taupo in July and arrived in the US only last month, determined to “get a feel” for the American cross-country racing scene.

Smith had a race-long battle with fellow Yamaha riders Cory MacDonald and Matthew Nix, wringing enough out of the small bike to secure third step on the podium.

Smith is considering an extended crack at the US calendar next season or the year after that.