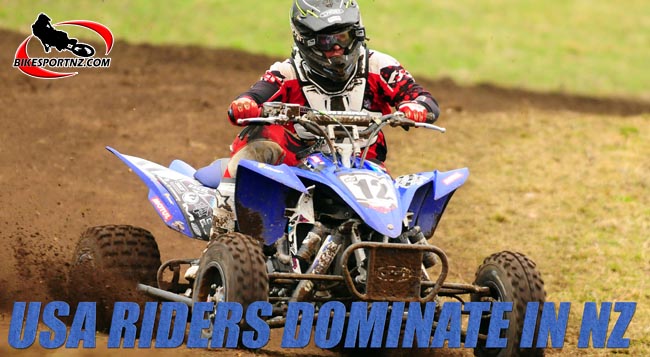 The invading Americans proved too strong for the Kiwi contingent at this year’s New Zealand All Terrain Vehicle (ATV) Championships near Timaru at the weekend.

United States riders Chad Weinen, from Illinois, and Josh Creamer, from Connecticut, finished 1-2 at the top of the premier grade this season, relegating defending national champion Ian Ffitch, of Amberley, to the No.3 step on the podium, with Australian national champion Luke Gaisford forced to settle for fourth overall.

Ffitch managed to win one of his seven premier grade races over the two days but it was never going to be enough to topple the impressive Americans.

“These are the two fastest ATV guys in the world, so I don’t really mind losing to them,” shrugged Ffitch.

“The one race that I won was when the track had been watered a bit much and I got a great start and just kept my cool to stay there. That race was a bit of a lottery really.

“I the other races, the American pair were five or six seconds a lap quicker than me and I never saw much of them. They were quite incredible. I couldn’t believe it.”

An outstanding run of wins from Tauranga’s Emma Goldstone saw her dominate the women’s grade, easily winning the title ahead of visiting Australian No.1 Simone Gaisford and Christchurch’s Nina McVicar.

Goldstone finished third in the first of her seven women’s grade races but then went on a win-streak, notching up six consecutive wins to finish the championship a massive 18 points clear of runner-up Gaisford.