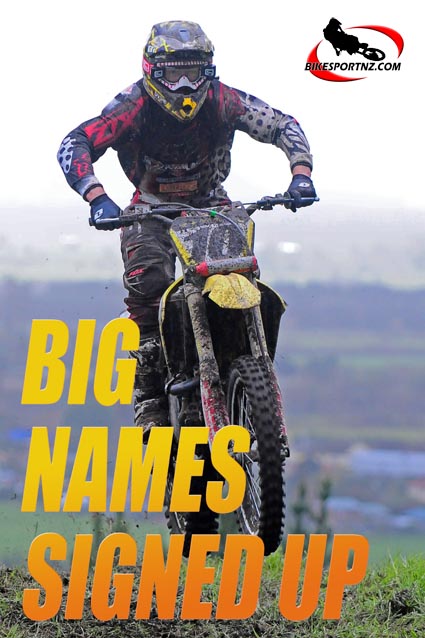 The resurrection this season of the famous six-hour dirt bike marathon seems to have re-captured the hearts and imagination of New Zealand’s elite off-road motorcycle riders.

Just as the big annual event seemed to be sliding towards yet another cancellation this year because of track conditions and consent for land use, up stepped Tokoroa dirt bike legend Sean Clarke with an offer to organise and run the Suzuki Six-Hour on free-draining forestry land called The Pylons, situated midway between Tokoroa and Taupo.

The race had been reborn and the response from the nation’s dirt bike community to that news has been both swift and encouraging.

Entries have already begun to flow in for the October 6 race, with many Kiwi internationals from other motorcycling codes also signing up to accept the challenge.

Kiwi international Cooper perhaps figures highest among the favourites to win the race, the former motocross champion’s recent successes in the popular Tarawera 100 endurance race pointing towards his status also as one of the nation’s elite cross-country racers.

He is expected to co-ride a Suzuki motocross bike with Penny, a former winner of the Suzuki Six-Hour when it was staged previously in Hawke’s Bay.

The big race offers many interesting match-ups and, in addition, Clarke has added a new dimension to the race, creating a veterans’ (over-50 years) ironman class.

“I thought to myself, if you are aged over 50 and you want to do the race on your own, well why not give them a class?” Clarke explained.

“Track preparation is all but done, with all the bulldozer work completed two weeks ago, so this will give the track time to settle.

“I have added a couple ‘rest areas’, where riders will be able to relax a bit and cruise down a road instead of in the trees the whole way around.

“The Suzuki Six-Hour is looking to be a classic event.”

As an innovation this year, Clarke said he was hoping to organise for a “radio check” at the point furthest from the pit area. Numbers will be loaded onto Facebook from an iPhone so that support crew and spectators back in the pits will be able to follow the progress of the race as it unfolds in the forest.

Clarke has also pleaded for riders to enter early.

“Riders who have entered before September 30 will get a rider’s pack with a few goodies in it when they sign in on the day.”