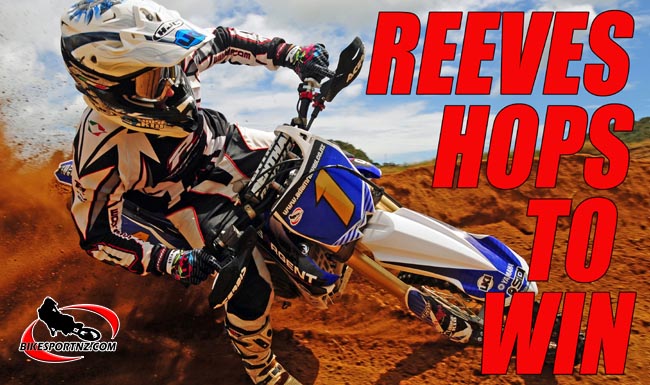 Palmerston North’s Adam Reeves showed all the style that made him a three-time national cross-country champion when he won the annual Dead Toad Cross-country race near Auckland at the weekend.

The race, in the sandy Woodhill Forest, north-west of New Zealand’s largest city, was always going to be a tough challenge and one that Reeves (Sargent Yamaha YZ450F) was willing to accept.

“Weather conditions were perfect, with the region receiving some rain leading up to the event and with the course makeup consisting of 99% pine trees and sand-based soil, I was looking forward to the challenge,” said Reeves.

“Unlike the previous event I did a few weeks back, where I competed against teams, in this event everyone rides solo and everyone starts together so it was a level playing field.

“I managed to make a hash of the start and entered the forest in around 15th position,” said the BikesportNZ.com-supported rider.

“With it being tight trees, passing was at a premium, so it took me some time to catch up to the leading bunch. At roughly about the 20-minute mark, I had latched onto the back of KTM’s Jason Davis and he kindly let me past after I hounded him for a while.

“I pitted for fuel after lap one and, at this point, I thought I was leading but my pit crew informed me I was in fifth position and roughly a minute behind.

“I was a little rattled by this but, at the same time, I knew I was still warming up, so I quickly upped the pace and set out after the leading bunch.

“It’s always difficult when chasing riders down in the trees as you can’t see your fellow competitors until you’re right on them, so you kind of just have to hope your pace is quicker than their’s. In my case it was.

“I was able to catch and pass three of the leading group around the halfway point of the second lap.

“Towards the end of the lap, I pulled in Honda’s Chris Power, who was leading, and before I had a chance to start looking for a way round him, he made a mistake, resulting in a small crash, handing the lead over to me.

“From that point onwards I just rode my own race, enjoyed the track and built a comfortable four-minute lead by the end of the three hours.

“Overall, it was a good day, well worth the drive and, of course, another win always helps.”