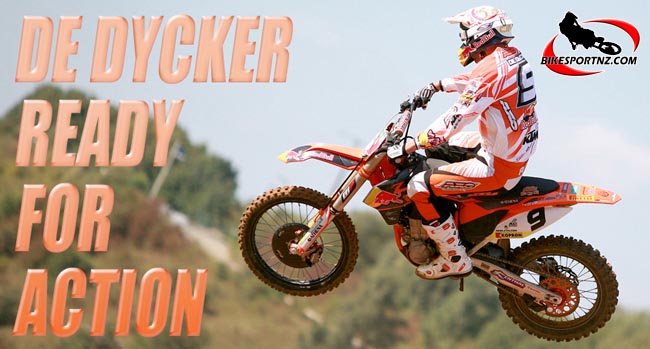 After winning the first three rounds of his highly regarded domestic series, Mont–Saint Guibert should have been the icing on the cake.

However teenage hotshot Jeffrey Herlings won all three motos and De Dycker experienced one of the most frustrating weekends of his professional career.

Ill and feverish, De Dycker even felt so weak that he decided not to get behind the gate for the final moto. This weekend the former German GP winner wants to end his successful FIM MX1 World Champiobnship season on a high note in Teutschenthal

You have won the German and British MX1 titles before, it must have been awesome to get the job done at home?

Ken De Dycker: “In theory yes. I know how much the Belgian motocross title means to my fans and myself. If you look at all those legendary names on the list of honour it’s very cool to see my name up there as well. I’m also happy with how I got the job done.

“I dominated the previous three rounds, but Mont-Saint Guibert was a huge deception! Already in Faenza on Sunday evening I didn’t feel very good. So in the week before the Belgian Championship final it was clear that I had the flu, a sore throat, headache … the whole shebang.

“In the opening moto I managed to limit the damage with the third place. With eighth place in the second moto I won the title and I was absolutely gutted! It was surreal, I felt so weak and low of energy that I could barely hold onto the bike. I needed to take it easy just to finish. Yet all these people were there to greet me after the finish line and celebrate the Belgian title.”

You actually didn’t race the final moto last weekend. What about the German GP?

Ken De Dycker: “That’s true, just for my own safety and to make the illness not worse I decided not the start. Normally I should be fine this weekend, allthough I didn’t train during the week. To move up from fifth in the final championship standings will be tough and that is beyond my control. I want to race the best possible race for my fans, especially after the disappointment of Mont-Saint Guibert. So my goal will be to get another podium finish in Teutschenthal. I know I can do it.”

Ken De Dycker: “I don’t really know if it suits me although I had some good results there. Usually the track changes quite a lot from Saturday to Sunday. On Saturday it’s pretty fast and smooth but luckily you have more lines and ruts on race day. So on race day I like it better.

“The start is really important there. Also because you don’t have very long straights and the track is quite small. So getting away inside the top-10 is a must. If the front runners break away it’s incredible hard there to close the gap. But  I feel confident and most of all I want to enjoy the racing.”