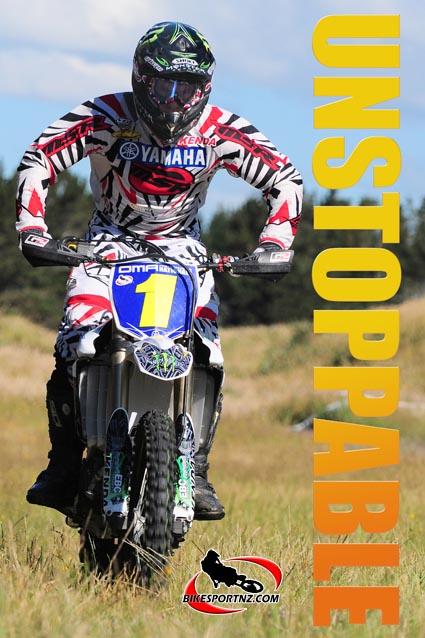 The Yamaha ace from Pahiatua won round eight of this year’s series at Dayton, Iowa, at the weekend, making it his eighth round win in a row as he gave none of his rivals even the merest sniff of a chance this season.

The former Manawatu forestry worker, known affectionately in motorcycling circles as “the Axeman”, has won the OMA title every year since he first won it in 2008 but none of his victories were quite as comprehensive as this year’s.

“Dry conditions and a fresh track that was almost completely single track would make passing tough so a good start would be important. Russell Bobbitt and Nick Fahringer also knew the importance of the start and as we all launch towards turn one after the flag dropped the handlebar-banging began.

“Nick tried to go around the outside, so Russell took him deep into the turn, I was able to sneak up the inside and take the holeshot and command of the track. The trail was fairly flowing with nothing super tight but there were not many places to get beside someone and make a pass, so I tried to push early as once we were into traffic I knew it was going to be hard to maintain the momentum.

“I pulled out to about a 13-second lead over the first few laps, Russell moved into second and closed the gap to about five seconds by the fuel stop.”

But, after the fuel stop, Whibley was back on the track and trying to make a break for it.

“The dust wasn’t too bad and the sandy creek bed that was added for the afternon race still held some moisture with one small creek crossing cutting up and trapping a few riders.

“On one of the hills I caught a bunch of riders, the lead guy got stuck with the following riders either piling into the back of him or diving to the sides in an attempt to keep moving. Luckily for me, as they fell they tipped apart and I was able to gently pop over their wheels and carry on up the hill.

“Russell kept the pressure on and I was not able to pull too much of a lead, taking the win with a slim 27-second buffer with Nick not far behind. With the win I was able to wrap up the OMA series for 2012.

“Big thanks to (my wife) Katherine and (crew man) Ryan for all their hard work. Thanks to the AmPro Yamaha team and all the great sponsors and supporters that have provided the product and support to make this possible.”