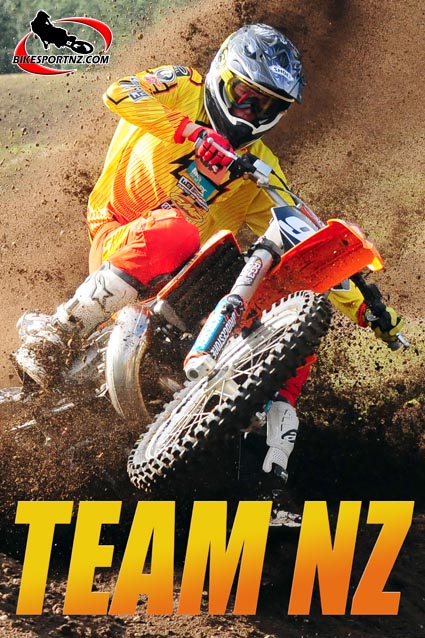 The New Zealand team to tackle this year’s Motocross of Nations in Belgium next month has been named.

It will comprise Motueka’s Josh Coppins and Mount Maunganui’s Cody Cooper, with MXoN first-timer Kayne Lamont, of Mangakino, as the third team rider.

It will be Coppins’ final race at the top level of the sport as he retires at the end of this season from all competition.

Other riders on the shortlist for that crucial third team member spot at this “Olympic Games of Motocross” were Mount Maunganui’s Rhys Carter and Takaka’s Hamish Harwood.

It is stipulated that the candidates for the MX2 category at the Motocross of Nations must be aged under-23 and the 19-year-old Lamont, 18-year-old Harwood and 22-year-old Carter each qualify on that score.

Carter will actually turn 23 just a few days after this year’s Motocross of Nations.

BikesportNZ.com rider Lamont (pictured here) has impressed selectors in recent months with his dominance of the MX Development Under-19 class in Australia.

Carter, too, has been impressive with his performances in the MX2 class in Australia and at the recent Tarawera 100 cross-country marathon.

Harwood has been racing with some success in the United Kingdom and Belgium this season, a key member of the Dirtbike-Gym Motocross Team, funded by expatriate Kiwi Rex Michau.

Tauranga-based Ben Townley was perhaps an automatic choice to race again for the team this year but injuries had put him on the sideline until just a week or so ago and he is far from 100% ready to return to this level of competition.

“The selection for the MX2 rider was always going to be difficult,” said Townley, an experienced Motocross of Nations campaigner and winner of one of the MX1 class races the last time he raced the MXoN, in Denver, Colorado in 2010.

“I hope they start learning to love the feel of sand in the crack of their butt sooner rather than later.”

The team will be managed by 2007 Veterans’ Motocross World Champion Tony Cooksley, of Pukekohe.

Motorcycling New Zealand said it had been fortunate to receive funding from the FIM (the world governing body) to assist in sending a team to the Motocross of Nations.

MNZ motocross commissioner Bryan Davidson said “the funding application emphasised a development team as Motorcycling New Zealand acknowledges the need to start developing riders at this level, especially given the service received in the past from our International champions will not continue too much longer.

“It is not often that we are given the opportunity to develop rider at international level, to have this assistance to future proof sending a team to this prestigious event that is viewed by millions of people worldwide is something that Motorcycling New Zealand is very grateful for.

“Without the assistance of the FIM, Motorcycling New Zealand would not be in this position of sending a team plus riders who have been targeted to represent New Zealand in the future at the Motocross of Nations,” said Davidson.

“Of the riders who applied to be part of the team, we have targeted two additional riders who will be able to represent New Zealand in the future, with the view of their development.

“They will be attending the event to work with the team prior to and at the event to have an understanding of the magnitude of the event. These riders will be contracted to MNZ with performance indicators to meet for the future.  Each year it will be the aim of Motorcycling New Zealand to have additional targeted riders,” he said.

New Zealand sent a “development squad” to the same event last season, when it was held in France, but none of those riders was considered this time around.

As a team, they finished 10th overall in the “B final”, a consolation race for non-qualifying countries, and ended the weekend with an overall Motocross of Nations ranking of 30th, beating just three of the 33 nations that had qualified to race that Sunday – Croatia, Lithuania and Iceland.

The United States trio won the event again last year, making it a seventh consecutive time that their representative team has topped the podium at the MXoN.

That win extended it to a record 22 times that Team USA has won the event outright.

The American team for this year’s event was also named over the weekend and it comprises Ryan Dungey (MX1), Justin Barcia (MX3) and Blake Baggett (MX2).