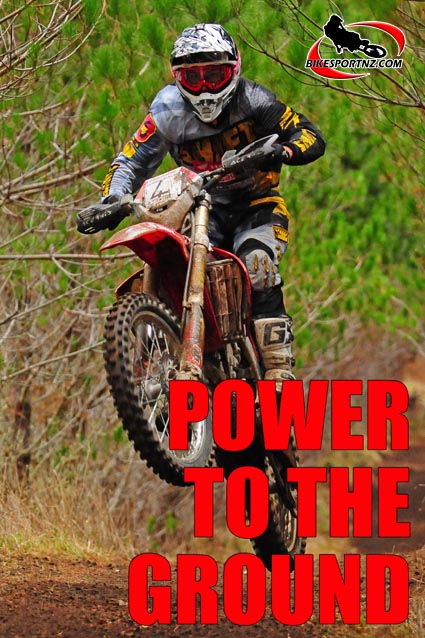 It was a scintillating performance from Honda ace Karl Power at the weekend as he won the fifth and final round of the New Zealand Enduro Championships near Taupo.

The only trouble for the 28-year-old Auckland-based bobcat contractor was that it was impossible for him to garner the rewards he deserved this season.

While there is no doubting his earth-moving prowess both at work and play, injuries prevented Power (Honda CRF250) from mounting a complete assault on the national series.

He had been forced to miss three of the series’ five rounds because of injury, so even his winning result at the weekend was never going to be enough to make up the ground he’d lost.

Inevitably, then, despite Power’s trail blazing performance at Taupo, the day belonged to rival Adrian Smith (Yamaha YZ250F), of Mokau, who finished runner-up to Power on Saturday and took the national crown outright for 2012.

“I was forced to miss rounds one, two and four, so the whole series has been pretty much a write-off for me,” said Power.

“But it is extremely satisfying to finish on a high like this.

“When I rode at Whangamata, and won the day there (although he was not eligible for championship points because he was riding under a ‘day licence’), I actually broke my foot that day, re-hurting the leg injury that had kept me out of the first two rounds.

“But, although this couldn’t be my year, I’ll be back stronger and more determined next season.”

Honda riders were to the fore in other class divisions, however, with Power’s cousin, Aucklander Chris Power (Honda CRF450), winning the over-300cc four-stroke class title.

“For me it was a do or die scenario as myself and Yamaha rider Adam Reeves (of Palmerston North) were both fighting for the 450cc class win with only one point separating us going into the final round.

“The tests were short and fast and you needed to be on the ball every second. One slip or one missed corner and you could easily drop out of the top 10 just like that!

“After the first three tests I had a slim lead over Adam but it was so to be a matter of just finishing as the Yamaha rider encountered an uncharacteristic mechanical (problem), putting him out of the event, effectively handing me the win, so long as I could finish the event strong.

“I ended the day in fourth overall and won the 2012 450cc New Zealand Enduro Champs title, giving me my third New Zealand class title. After relinquishing my 2010 championship title in 2011 due to injury, it feels good to be back on top again.

“And, to add to that, I managed to finish the series in second outright behind another Yamaha rider, Adrian Smith – something else that I was happy to achieve after my seriously up and down season.”