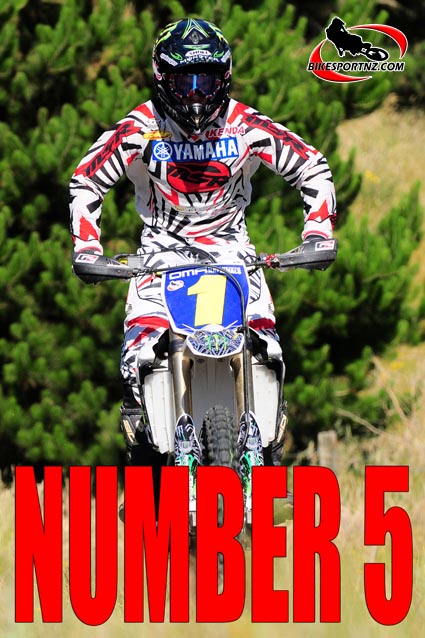 The number five signifies many things in the race career of Kiwi Paul Whibley right now.

The Yamaha ace recorded his fifth win in a row at round five of the Off-road Motorcycle and ATV (OMA) series in the United States at the weekend.

And it means he creeps ever closer to a record fifth title win in a row in that championship series.

It was an almost inevitable fifth consecutive win for Whibley (Yamaha YZ450F), so dominant has he been in the competition this season.

The man from Pahiatua is running away with the 2012 series and looks unstoppable as he seeks to make it a record five OMA titles in a row.

Whibley won round five of this season’s championship, the HangMan Cross Country in Hanging Limb, Tennessee, at the weekend, further stretching his lead at the top of the points standings and ensuring he is well on course to keep the crown he has held every year since he first won it in 2008.

“I got off to a good start and ran side by side with Russell Bobbitt going down the long start straight and into turn one,” said Whibley.

“I had the inside line and Russell tried to out-brake me but went way too deep into the first turn. I hugged the inside and took the lead. Russell stayed right on my back wheel. That was the only way he could see through the dust in the early sections.

“My AmPro Yamaha team-mate, Jordan Ashburn, was riding the new WR450, getting some good seat time and working on his bike’s set-up. He came through the pack after an average start and soon was closing in. In the third lap I made a mistake on a hill and had to dog-paddle up it.

“Jordan was quick to pounce and slipped by as we crested the rocky climb. A couple miles later he stalled his bike and I shot back to the lead. I put my head down and tried to up the pace.

“Jordan was riding well and I needed to build a lead and maintain it even as the rain arrived and made the track quite slick.

“On the last lap I backed it down a little as it would have been all too easy to throw it away on a few of the fast, slick logging roads.”

The victory meant the Kiwi rider has now extended his points lead in the title chase to 28 over Bobbitt and Nick Fahringer, the two Americans who are tied for second place.

Bobbitt and Fahringer continued their see-saw battle over second place and second place in the series with Fahringer getting the advantage over Bobbitt this time around.

The two have swapped 2-3 positions in every round since the beginning of the 2012 championship.

Fourth overall went to Husqvarna rider Daniel Janus, while Whibley’s team-mate Ashburn unfortunately ran out of fuel on the final lap and had to settle for fifth place at the finish.