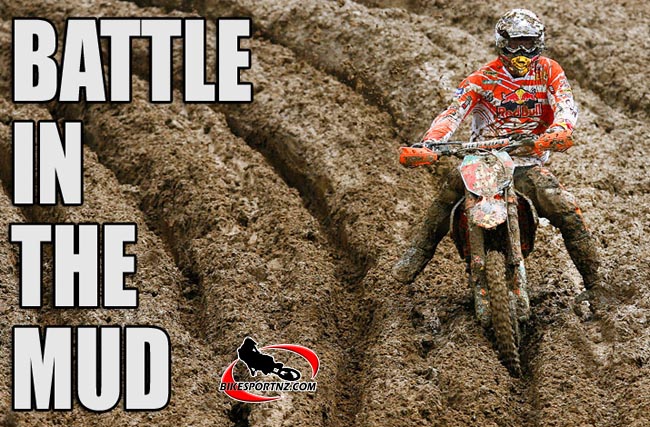 The muddy Kester race was the second of the five round Belgian Motocross Championship. With 3-1 results the Red Bull-KTM rider claimed the overall win ahead of fellow KTM star Jeremy Van Horebeek and Jeremy Delincé. His second consectuve domestic win gives ‘Keeno’ an 18-point lead over Tanel Leok in the series.

Relentless rain turned the scenic, natural track into a slippery and treacherous affair.

The organising club had decided to cancel one race and in order to preserve the track both sidecar and quad classes were cancelled.

In the opening moto, De Dycker suffered his first crash of two of the day. Although the muddy terrain and tricky slopes made the going extremely tough De Dycker confidently guided his SX-F450 from ninth in the opening lap to third at the finish line behind Delincé and Van Horebeek.

De Dycker made things easier for himself in the second moto. Taking an early lead, he turned his race into a mud riding masterclass in spite of the stiff competition including five fellow factory riders and the legendary Kiwi Josh Coppins.

De Dycker recorded his fourth win of the 2012 Belgian championship with a healthy 23-second lead over Van Horebeek. Leok was third in front of Evgeny Bobryshev and Dutch champion Herjan Brakke.

“It crossed my mind that maybe there would be no second moto,” said De Dycker.

“Or that they would prematurely end the first moto… So after my crash early on I pushed to bounce back as well as possible. At a certain point I had to take of my goggles off and then you really didn’t see anything! So, all in all, my third place was not so bad. Actually, I never got stuck today although you had some pretty deep ruts today. I have to admit that my long legs come in handy to lift my bike in mudders like these!

“But racing in these conditions is very difficult regardless. Still I wanted to make the best of it, especially for all those fans who have paid to watch us and for the club who always put tremendous effort into this race. At least we riders have the advantage that we are able to wash ourselves in between the motos that’s something fans can not do! In itself, I don’t mind riding in the mud although you always have to be very careful. ln terms of riding, I was quite satisfied with both motos. In the second race I took the lead from the second corner. After that I could do my own race. I knew I was pretty safe because if you’re right behind someone you don’t see a thing and when you want to make a pass you have to hit even more slippery lines.”