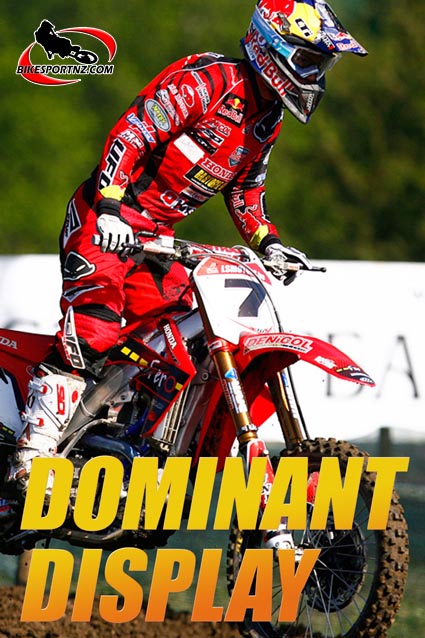 The reigning Spanish champion produced the perfect day at the LS Honda Racing Team rider’s home track in front of his own club by claiming two moto wins.

Nearly 4500 fans attended the sixth round of the season where José Antonio Butron and Alvaro Lozano respectively claimed second and third.

Extreme heat had forced the organising club to cancel Saturday practice to battle the dust, however continuous watering during the night and maintenance on Sunday resulted in excellent riding conditions for the spectacular ‘La Nava’ track.

Pole-sitter Butron led the first two laps of the opening sprint of the day before he was overtaken by Barragan.

Cheered on by the crowd, Barragan immediately put in some very fast laps to create a gap. In the end he crossed the finish line over 10 seconds in front of Butron.

At the start of the second moto the CRF450R mounted LS Honda Racing rider almost went down. He quickly moved up to second after an early pass on Alvaro Lozano.

Comfortably following leader Butron for most of the race Barragan waited until the end to push for his sixth victory of the season. The Red Bull athlete made the pass stick with three laps to go. With Lozano and France’s Maxime Lesage third and fourth the result of the second sprint was the exact carbon copy of the first.

The penultimate Spanish Championship round will take place in Caceres on September 16.

“I came to El Molar to win,” said Barragan.

“Of course when you ride on your home track the pressure to deliver is there but I did what I needed to do to catch up in the championship. I was strong and pretty happy with my riding all day long. In the second moto I knew Butron would be fast in the beginning so I preferred to play it cool. I picked up the pace near the end and that was enough to win. For me it’s always nice to race at El Molar. Of course this was the best possible way to celebrate the return of the championship to our track! Now I’m ready to get a good result in Sweden.”

Next weekend Barragan will line up in Uddevalla, Sweden for the ninth round of the MX1 World Championship.