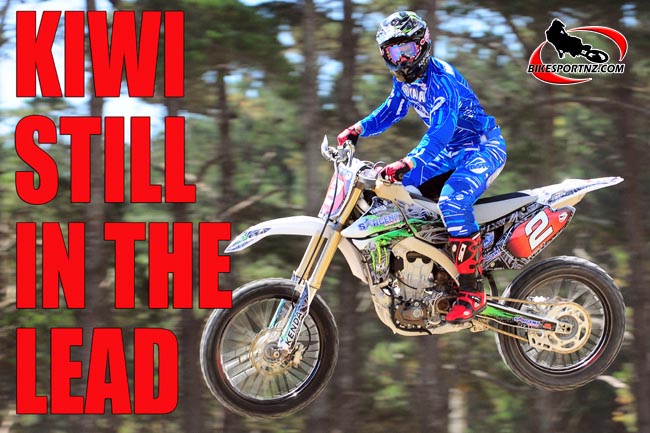 New Zealand’s Paul Whibley has a battle on his hands but, for the time being at least, he still leads the Grand National Cross-country Championship standings in the United States.

The Yamaha ace from Pahiatua won the opening round of the series in Florida in March and has managed podium finishes at each of the following rounds, the former Manawatu forestry worker settling for runner-up spot at round four of the series in Union, South Carolina, at the weekend.

Whibley snatched the lead at the start in South Carolina, but it was American youngster Kailub Russell who set the early pace on his KTM 350, as he led the 2009 champion Whibley and 2011 champion Charlie Mullins through the opening stages.

Russell managed to pull away from Mullins and Whibley, who were locked in a fierce duel of their own.

Then Mullins and Whibley both struck problems, each of them in turn getting stuck in a deep mud hole and losing valuable time as they extricated themselves.

“I also tangled with a rider who made the mistake of looking over his shoulder to see who was coming up behind him,” said Whibley. “He rode straight into a tree and his bike spat out in front of me and I went down as well. I gave the guy an earful at the time but he was really only trying to get out of the way, so no hard feelings.

“I was just frustrated as this mistake cost me time that would be hard to make back up on Kailub. Remounting with twisted clamps I soon had Charlie back on my tail. The two-lap board came out and over the last couple of laps I edged away from Charlie but there was no catching Kailub who rode another great race.”

Whibley (Yamaha YZ450F) was eventually able to get the better of Mullins, accepting second spot on the podium and maintaining a narrow lead in the championship standings.

Whibley’s championship lead has been shaved back to just two points from Russell, with Mullins another 13 points further back.

Mead is now sixth overall in the series standings.