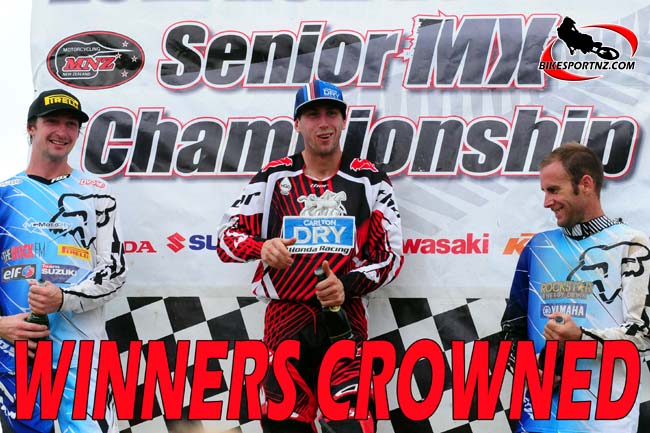 Two months of furious race action came to a thrilling conclusion at the fourth and final round of this year’s New Zealand Motocross Championships in Taupo on Sunday.

Home-town hero Ben Townley basked in the glory of the moment, his family and friends all there to witness as the 27-year-old Kiwi international celebrated winning his first senior national motocross crown.

Almost exclusively racing overseas since 2001, the Bay of Plenty rider was thrilled to return home and claim the most prestigious of New Zealand’s motocross titles, the MX1 (open class) crown, and he did it in style.

Former world champion Townley won all but one of the series’ 12 races – three MX1 races per round – and wrapped up the title with a race to spare at Taupo on Sunday.

“It is the nature of my racing career that I have not been in New Zealand to tackle the nationals for so many years,” Townley agreed. “I have a dozen or so New Zealand junior titles to my credit but never a senior title. It’s good to be able to finally tick that box.”

Meanwhile, last year’s MX2 (250cc) class champion, Hamilton’s Darryll King, had his work cut out on Sunday on his way to successfully defending his title.

He started the day just one point ahead of Queenstown’s Scotty Columb, but when King won the day’s opening MX2 races, while Columb managed only eighth, the pressure went off.

The 43-year-old King then wrapped up the day and reclaimed the title with 3-1 results.

Although Columb finished runner-up (to Mount Maunganui’s Rhys Carter) in the second race of the day, a bent brake disc forced him out of the final race, capping off a “disappointing” weekend for the 28-year-old.

Columb still managed to finish runner-up to King in the championships, with Carter stepping up to claim the No.3 spot.

In the 125cc and under-21 year’s dual-title division, Amberley’s Micah McGoldrick completed the task he’d started when dominating both classes at the opening round back in February.

McGoldrick had a race up his sleeve at the start of the day at Taupo and, as expected, wrapped up both titles with a race to spare on Sunday.