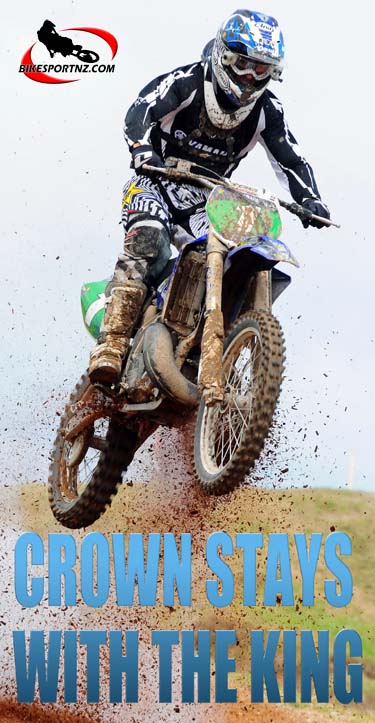 The 43-year-old showed the mark of a champion when he successfully defended his national MX2 (250cc) crown at the fourth and final round of this year’s New Zealand Motocross Championships in Taupo on Sunday.

Former world No.2 King (MXDK Yamaha) looked as though he might have had a fight on his hands as he started the day just one point ahead of his nearest rival for the title, fellow Kiwi international Scott Columb, of Queenstown.

But when King won the first race of the day – while Columb (Moto City Suzuki) managed only eighth – a lot of the pressure suddenly evaporated.

King then wrapped up the day with 3-1 results, comfortably defending his crown.

“The day was perfect for me in the end,” said Hamilton’s King afterwards.

“The bike was great, my mechanic was fantastic. I planned to come here and ride strong to keep the title and that’s what I did.”

Columb was philosophical about his campaign.

“I’m naturally disappointed not to win,” said Columb. “This is three national championships where I’ve been in the hunt but come up short. It has been four years since I last raced at Taupo and that didn’t help either.

“I was fighting through traffic in one race when another rider went across in front of me and bent my brake disc, forcing me out of the race. These things happen in racing but I’m still very disappointed.”