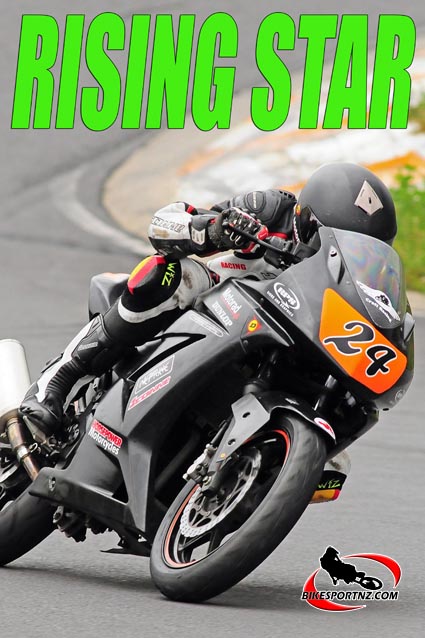 Kapiti’s Sam Croft is setting the Kiwi road-racing scene alight with his performances this season in the 250 Pro Lites class.

After three of five rounds in the 2012 New Zealand Superbike Championships, the 18-year-old Kawasaki ace leads the Pro Lites class, a massive 62 points ahead of the current national champion, Tapanui’s Seth Devereux.

Croft has won seven out of 10 races in the nationals thus far and finished runner-up on the other three occasions.

Each time he finished second he was within just 0.2s of the winner.

Paraparaumu’s Croft has shown maturity beyond his years, proving himself capable of coping with dangerous situations on the race track, and, though racing on a shoestring budget, he has achieved some remarkable successes.

But help is needed if he is to progress to the next level, with the young man’s sights set on tackling the European Junior Cup later this year.

As with all kinds of motorsports, talent and tenacity is important, but funding is also a huge factor. Croft has the first two characteristics in abundance, but lacks in the third and he is now appealing to potential sponsors.

“We have struggled to raise funds to compete in the national competition,” said Croft.

“I rely on my parents for this financial support, who can do no more, and I add what I can, although having just left school I am yet to obtain fulltime work.

“I can secure free accommodation in Germany for the duration of the European Junior Cup. I believe this is my opportunity of a lifetime and if I get there, I believe I can win.

“My ability to learn new tracks fast and set the pace has been shown at the national competition.”

•       He will contest the Paeroa Street race in F3 and in the North Island rounds 2012 NZ Castrol Power1 Superbike championship on the SV650.

The entry for the 2012 KTM European Junior Cup includes ownership of the motorcycle, tyres, fuel, motorcycle transportation and storage, workstation, coaching and technical support and is priced at only Euro-19,950 plus VAT where applicable.

The 2012 champion will receive a total package worth 23,000 Euro towards a ride in the European Superstock 600 championship.