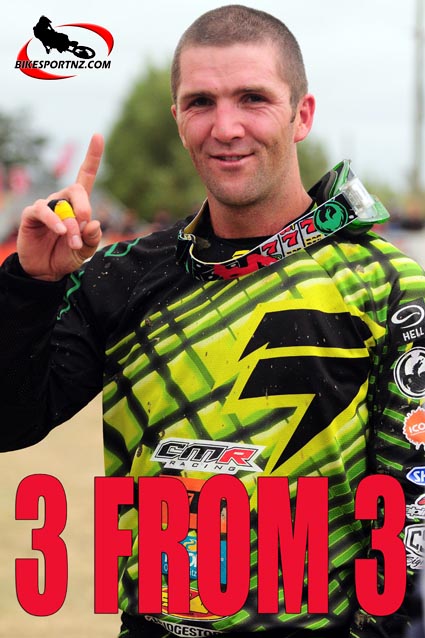 Masterton’s Burkhart and Amberley’s McGoldrick were in scintillating form at the 51st annual New Zealand Motocross Grand Prix at Woodville at the weekend and whether anybody will be able to match the two CMR Motorex KTM riders in the big races that now follow remains to be seen.

Both Burkhart and McGoldrick won their respective classes at the big annual Woodville extravaganza and with it sent very loud warnings to their national MX2 (250cc) and 125cc rivals respectively.

Indeed, they could be the men to beat when the New Zealand Motocross Championships kick off in South Canterbury in less than two weeks’ time.

McGoldrick (KTM 250F) was outstanding in racing on Saturday, dominating the junior 14-16 years’ 250cc class with a hat-trick of wins and also winning the Champion-of-Champions race that wound up the day, leading a KTM 1-2-3-4 by finishing that feature race ahead of fellow KTM riders Haki Waller (Rotorua), Hadleigh Knight (Atiamuri) and Billy Frank (Levin).

Meanwhile, Australian visitors Hunter Lawrence and Blake Cobbin joined with Nelson’s Reece Walker to make it a KTM 1-2-3 in the 11-12 years’ 85cc class.

“I’ve only ridden the bike two times since I last raced (at Whakatane just after Christmas), so to come here and win is pretty encouraging. It’s a good build-up for the nationals,” said Burkhart.

“I think my performance today is a good warning to the other riders that I’m not here to muck around. I am very motivated for the nationals now.”

Taupo’s Ben Townley (Carlton Dry Honda) was the dominant force in the MX1 class and he, too, will be hard to beat when the nationals roll around. 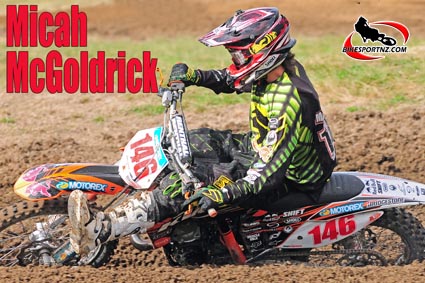