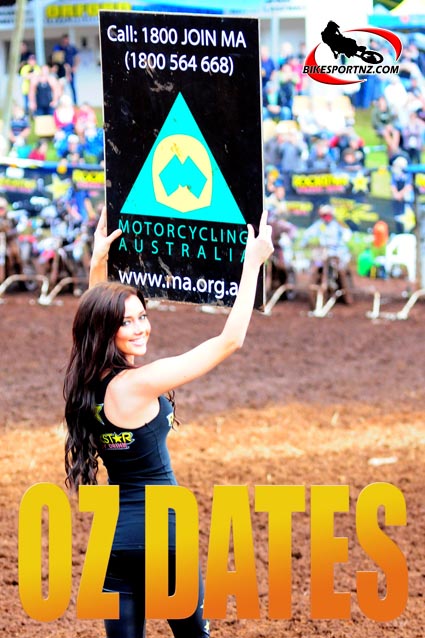 Williams Event Management (WEM) has announced the formats that competitors will race under during the 10-round 2012 motocross nationals, the Australian Motocross Championships.

WEM has continued to create and evolve custom formats specific to the national series, introducing formats that will feature a blend of traditional motos around 30 minutes in length, as well as a mix of spectacular shorter, back-to-back races.

“Everybody has different opinions on formats, some are very traditional and others like the fast-paced shorter format,” WEM boss Kevin Williams explained.

“I think the compromise we have come up with will be a win-win for all. We are very excited about the 2012 championship and I believe that we have the best rider line-up ever, so it’s going to be one season not to miss.”

The formats of the MX Nationals, Australian Motocross Championship, will be structured by the number of laps for each race, rather than timed to a certain length in 2012.

* Round two (Coonabarabran) will be adjusted, according to the longer track length

** Subject to change at the promoter’s discretion, with approval of the Clerk of Course

Meanwhile, after releasing the provisional dates and states in November, WEM has now officially confirmed the event locations, spanning across five states for this year as the series returns to Western Australia.

“We are very excited with the venues for the 2012 championship series,” WEM’s Kevin Williams commented. “The two TBA venues will be finalised within the next two weeks.

“With the addition of new teams and the increase in trucks now over 20 transporters, we are making sure we have room in the paddock for all the trucks.”

The series will kick-off at Conondale in Queensland on 1 April before the field of world-class contenders do battle throughout the months of April, May, July and August.