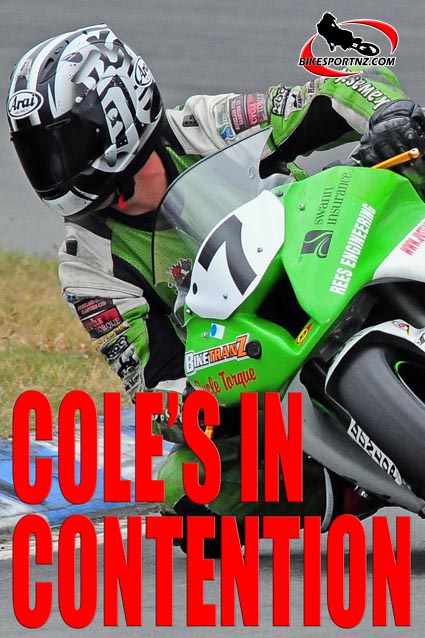 Hamilton’s Nick Cole has blasted his way into title contention after a scintillating display at the third round of five in this year’s New Zealand Superbike Championships.

The Kawasaki ace won the day at Teretonga Park, just outside Invercargill, on Sunday, elevating himself from 12th after round one and seventh overall after round two, to now sit comfortably fourth in the series standings.

Cole (Red Devil Racing Kawasaki ZX-10) is just half a point off third-ranked Christchurch rider John Ross and, with the series now heading closer to his home in the North Island for the remaining two rounds, Cole fancies his chances of gaining a podium finish this season.

Cole is no stranger to winning championships, the 25-year-old riding a Kawasaki Ninja ZX-6R to clinch the national 600cc supersport title in March 2010.

But it’s an entirely different story to win races on a 1000cc superbike, something that Cole is keen to develop a taste for and something that he has also now proven he is more than capable of doing.

He was running sixth in the first 15-lap superbike race of the weekend when it was halted after just four laps because of a fallen rider. With the race re-started shortly afterwards, and now half points on the line for each separate stanza, Cole was determined to improve and, after the 11 laps were done, he had climbed to third place.

But the best was yet to come and, in the second 15-lap superbike race, Cole attacked.

“I was about third at the end of the first lap, with Sloan Frost (BMW) and James Smith (Suzuki) in front of me,” Cole said. He soon passed Smith and then caught up to Frost.

“I followed Sloan for a couple of laps. I got tired of riding in his spray so I passed him on the outside of turn one, the loop, pulled out a gap of about two seconds and then rolled off the throttle slightly.

“It was great to look back and see a gap and be able to roll off the throttle and just savour the moment,” he said as he celebrated his first national superbike class win.

“I always knew I’d go well in the wet. I’m definitely stoked with the win. The bike felt great and I have a lot of confidence now.”

The riders now take a break until March 18 and the fourth round of five at Hampton Downs, near Huntly. The fifth and final round is set for Taupo on March 25.