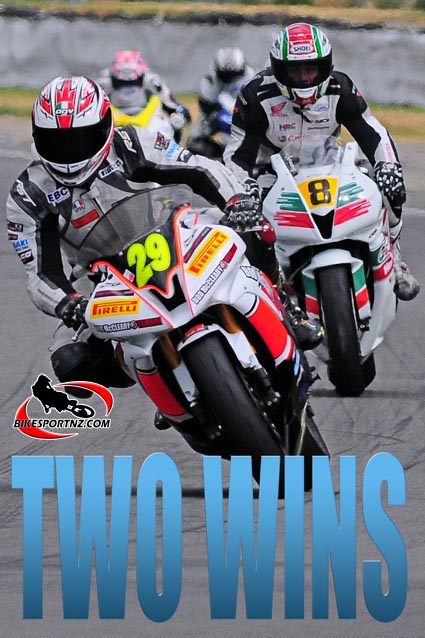 It was all about the numbers for Rangiora’s Jake Lewis as he lined up at the weekend to race the opening round of this season’s New Zealand Superbike Championships at Christchurch’s Ruapuna Park.

The bold number 29 stamped on the front and sides of the motorcycle ace’s Yamaha may seem unusually high for a young man who is a national champion, but there are a couple of very good reasons for this.

The 16-year-old Lewis has decided to step up to the 600cc superstock class for 2012, therefore abandoning any attempt to defend the No.1 plate he earned by winning the 125GP class title last season.

But what’s the significance of the number 29?

That’s the number his former road-racer father, Rob Lewis, used when he last raced and, even more significantly, it was 29 years ago that Rob Lewis won the New Zealand 600 Grand Prix title at Ruapuna Park.

So what better way is there for his teenage son to mark the occasion but to go out and win the 600cc superstock trophy and bring it back home?

Jake Lewis was fastest qualifier in the 600 superstock class at the weekend, putting his Bob McCleary Yamaha R6 on pole, and he backed that up by winning both his races on Sunday, the second of which carrying extra honour as the NZ GP race.

He won the first race ahead of fellow Yamaha rider Rhys Holmes, of Katikati, and the second race win was ahead of Christchurch Yamaha rider Daniel Ornsby.

“I was pleased to qualify fastest but then we got better each time on the track after that too,” Lewis grinned.

“I felt pretty comfortable today, especially in the last race.”

He’s looking forward to round two this coming weekend at Levels Raceway, Timaru, and round three at Invercargill’s Teretonga Park the following weekend.

By the time he heads back to start his year 13 stint at Rangiora High School, Lewis could be well on the way to winning another national motorcycling title.

The five-round series wraps up with two North Island rounds, at Hampton Downs, near Huntly, on March 18 and Taupo on March 25.