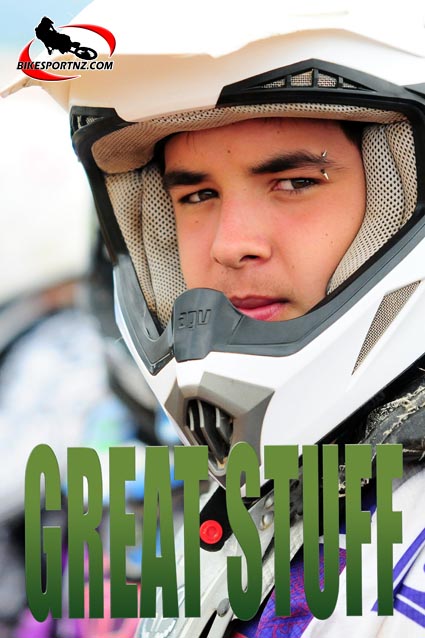 Sixteen young champions have been crowned – one of them a Kiwi rider – after an action packed final day at the 2011 Honda Australian Junior Motocross Championship in Murray Bridge, SA.

In the 85cc 14-U16class, Auckland’s  Chase Smith finished 3rd but was given 4th on a count-back.  Sean O’Connor was 6th in this class.

In the 150cc 15 years’  class, Harwood (pictured above) was crowned champion but 7th was Chase Smith and Kurtis Lilly was 18th.

After a week of tumultuous weather conditions, South Australia turned on the sun in time for the deciding day of competition, leaving the Monarto Motocross track dry for the last 16 battles of the championship.

And, as expected, the Australian riders dominated.

The youngster swept to victory in the 85cc 9-U12 class with a comfortable 11 point margin over Victorian Callum Norton (GMR Motorex KTM) and Tasmanian Wade Kirkland, before smashing home to take the 65cc 11-U13 class with an unbeatable 125 points. Kirkland took another medal, picking up the silver on 106 points ahead of Queensland’s Reece Rayner (GMR Motorex KTM) on 102 points.

Jordan Smith finished a fantastic Championship campaign with two gold medals in hand. The US Suzuki rider rode to success in the 100-150cc 13-U15’s, taking out all three finals to lock in the ultimate 75 point tally. Smith was tailed home by Queenslander Joel Dinsdale (Yamaha Junior Racing QLD) on 64 points, and Western Australian Jayden Rykers, who managed to nab a 57 point bronze medal score despite placing sixth in the final race. Smith also swiped the crown in an exceptionally close 250cc 13-15 years class, finishing with 69 points ahead of Dinsdale (68) and Western Australia’s Kyle Webster (45).

NSW rider Egan Mastin (GMR Motorex KTM) took out the 85cc 12-U14 crown, with a second place finish in today’s spectacular decider pushing his final point tally to 72. 2010 Champ Mitchell Evans (GMR Motorex KTM) from Queensland rode solidly to finish the Championship in second place (62). NSW rider Dylan Heaton (Dirt Bike Factory, KTM) pulled out a brilliant ride when it was most needed, storming the field in the decider to take line honours and claw three rungs up the ladder to finish with the bronze.

New Zealand rider Hamish Harwood romped home in the final 100-150cc 15 years’ race to wrap up the title, finishing the championship on a mammoth 72 points.

Dual 2010 champion Scott Mann (GMR Motorex KTM) from Queensland walked away with the silver (58 points), while Joel Milesevic (Yamaha Junior Racing) stole the Championship bronze from his fellow Victorian Billy Jackson by a single point after placing second in the decider.

Riley Dukes picked up a second medal, claiming the 150cc 9-U12 championship title in a tight points battle. The NSW rider finished the finals with 105 points, collecting three wins across five events. Mitch Johnstone from Queensland took the silver with 101 points, despite finishing ninth in the final race. NSW rider Cooper Pozniak (Coastal KTM) walked away with third in both the Championship and the final race, with a total of 105 points in the bag. Queenslander Mason Rowe missed out on the bronze by a mere two points, despite surging to a second place finish in the final race.

Keith Tucker from the US nabbed gold in the 85cc 14-U16 class after solid finals performances and two wins left him with a total of 110 points. Victoria’s Mitchell Landy (99) collected the silver and South Australia’s Jett Anderson (88) narrowly squeezed onto the bronze podium ahead of Chase Smith.

After enduring a week of difficult and boggy conditions, the young crew in the 50cc 7-U9 class enjoyed battling out their final race out on a dusty track. Liam Andrews secured his fifth consecutive chequered flag to secure the ideal 125 points and the Aussie Title. Young Queenslanders Noah Ferguson (Twisted Sports, MX Race Prep) and Jett Lawrence finished the final race and the Championship in second and third place, on 108 and 96 points respectively.

The 250cc 15 years class provided the final encounter of the Championship, with the big bikes the last to roar down the Monarto Motocross straight.

The Aussie Title belonged to 2010 250cc 13-U15 years Champion Hayden Mellross (Honda Junior Development Team) who was victorious after stepping up to the 15 years class for his last Junior Aussie Championship. The NSW rider amassed a winning 70 points across three finals, and was followed onto the podium by Hamish Harwood (62) and Scott Mann (55).

Jones also secured herself a silver medal, finishing second in the Female Lites on 112 behind new Aussie Champion Mackenzie Tricker (Yamaha Junior Racing) who ratcheted up 117 points. Tricker, from NSW, performed impressively throughout her last Junior Championship to improve on her 2010 second place finish. Victorian Emma Milesevic also bagged a second Championship medal, taking third in the Lites with a 106 point haul.