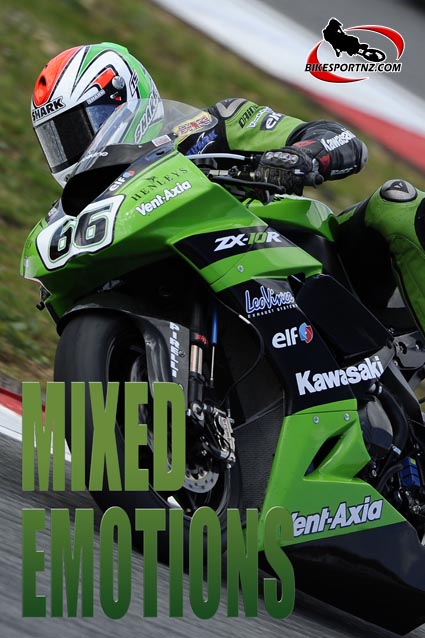 Britain’s Tom Sykes has praised the Kawasaki team after claiming a superb first career World Superbike Championship win at the Nurburgring, in Germany, in terrible weather conditions at the weekend.

It was a day of mixed emotions, however, for Sykes. His victory also came on the same day he was apparently informed he would not be retained by Kawasaki for the 2012 season

Considered something of a wet weather specialist having scored two pole positions for Kawasaki in similar weather, Sykes quickly established himself as a front runner when race two got underway under rainy skies.

Though he would lose several seconds to Noriyuki Haga out front, Sykes found himself in the right place at the right time when the rain intensified and the Japanese rider ahead slid out.

Leaving him at the head of the field, with the race being stopped shortly afterwards, Sykes was declared the winner, a remarkable result for the manufacturer, which hasn’t even enjoyed a podium finish since Magny-Cours in 2007.

A first win for Kawasaki since Chris Walker won in similarly bad conditions at Assen in 2006, it is also Sykes’s first WSBK victory in 74 starts and his first podium since his wild-card performance for Rizla Suzuki at Donington Park in 2008.

“To get a first World Superbike win under my belt is fantastic, also with the new Kawasaki,” Sykes, who finished 11th in the dry first race, said.

“Everybody in the team knows every time I put my leg over the bike it is all or nothing; that is the way I ride, and fortunately today that commitment paid off in race two. I got a gap behind me in the worst conditions but as the track had less water on it for a time, unfortunately our times seemed to tail off and I came under pressure from Sylvain. But as the standing water increased again we found our pace.

“In race one everything went to plan at the start but both the wrong tyre choice and my physical condition did not help, so when it started raining I had a bit of a grin to myself. We changed the bike quite a lot from the last time in Misano when we got pole position so obviously it was a little bit of a gamble in wet conditions. The guys gave me a great package.” 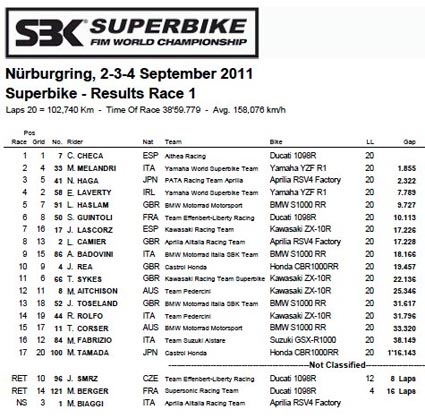 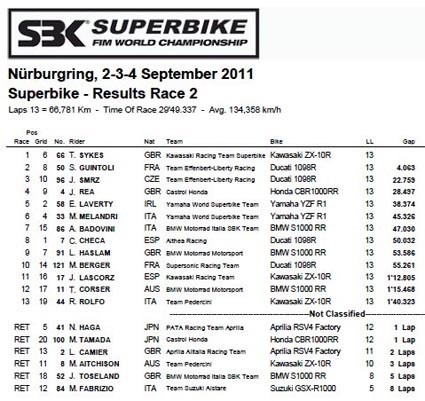 2011 World Superbike Championship rider standings (After round 10 of 13, previous round position in brackets)