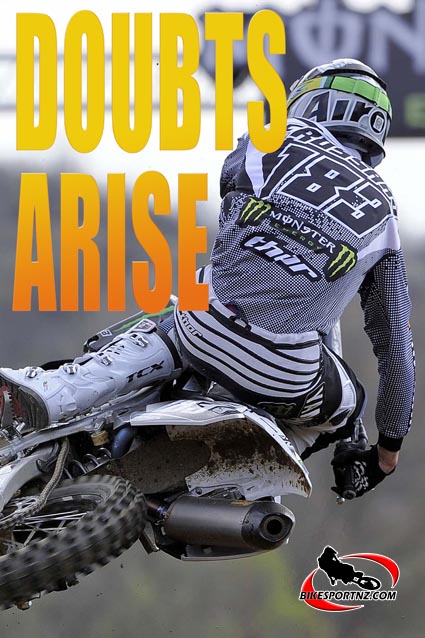 France’s Steven Frossard has been ruled out of final 2011 Grand Prix of the season and may also be sidelined from the French team for the upcoming Motocross of Nations.

The Monster Energy Yamaha rider (pictured above) will sadly not be able to contest the Grand Prix of Italy at Fermo this weekend for the 15th and final round of the FIM Motocross World Championship.

If he is also ruled out of the MXoN team, it is likely that Christophe Pourcel will take his place in the French line-up.

Frossard had initially planned to enter the GP meeting in Italy this weekend after feeling no ill effects in the wake of his crash last Sunday at Gaildorf in Germany.

The winner of the Swedish and French rounds of the MX1-GP series this year went for further examination on his chest in Belgium this week and was found to be suffering from a lung infection that was causing a bubble to appear. Medical specialists advised that it would be dangerous to consider participating at the scenic hard-pack circuit near the east coast.

Frossard has had an immense first season in MX1-GP and also with the factory team on the YZ450FM. He picked up six podiums and is currently second in the series; a standing he will retain if fourth-placed Max Nagl, of Germany, cannot score more than 33 points in the final two motos of the year. He is guaranteed a top four finish.

Frossard will have another x-ray on Monday to determine whether he will be able to represent his country at the 65th Motocross of Nations at St Jean D’Angely in France the following week.

France was tipped as a contender to beat the seemingly invincible United States team this year, particularly on home turf, but that is probably now in doubt.

Team USA is again favoured to win the event after capturing its sixth straight win at the MXoN when it was staged in Denver, Colorado, last season.

The United States also holds the record for having the most wins at this event, taking the podium top spot on 21 occasions since the inaugural event in 1947. Britain is next best with 16 wins to its credit.

While the French have their fingers crossed that they will still be a strong threat to the Americans, so too do the typically fearsome Belgians and Italians.

Team Belgium is typically one of the top three teams at this event but, with top riders Clement Desalle, Steve Ramon and Ken De Dycker all injured, that might be a tough task for them this time around.

Team Italia is also weakened, with the absence through injury of former world champion David Philippaerts.

Davide Guarneri is the substitute for Philippaerts.

Team Italy is now formed by Antonio Cairoli in the MX1 class, Alessandro Lupino in MX2 and Guarneri in the Open class.

Team New Zealand traditionally rates as an outside chance of a top-three spot, something they have achieved on three notable occasions previously, in 1998, 2001 and 2006, but that is unlikely this year with a “development squad” of previously untried riders there to wave the silver fern flag.