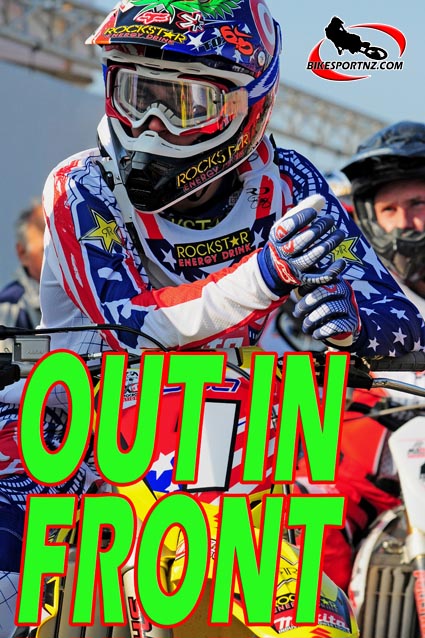 Defending American open class motocross champion Ryan Dungey captured his third victory of 2011 on Saturday, on a day that saw a dramatic mix-up in the 450 class standings at round eight at Washougal Motocross Park.

In the 250 Class, Kawasaki’s Blake Baggett raced to his series-leading fifth victory of the season.

The opening moto of the 450 class featured a tremendous battle between Dungey and his Monster Energy Kawasaki-mounted rival Ryan Villopoto. Looking to grab his first ever win at his home track, Villopoto fended off the many challenges of Dungey, until the reigning champion fell while attempting to pass Villopoto for the lead. As Villopoto rode to the win, Dungey remounted to secure second.

In moto two, a holeshot and early lead by Villopoto was eliminated when a red flag was thrown after just over three minutes had elapsed.

Following a restart, Dungey grabbed the lead out of the gates and never looked back. Villopoto did his best to keep up, pacing Dungey throughout the first third of the moto. However, the deficit gradually increased, and Dungey cruised to the chequered flag. With identical moto scores, Dungey and Villopoto tied in points, but by virtue of the second-moto tiebreaker, Dungey earned the overall win; his fourth straight at Washougal.

“The first moto was good,” said Dungey. “I was slow in the first few laps, but I was able to inch up on (Ryan Villopoto) and find some lines. I tried to make the pass, but he pinched me off.

“I tried again, and hit something, which spun me right around. I got a good restart in Moto 2, and Villopoto was on me, but I found some good lines and started to pull away. To be back in position to win the title brings a sense of joy; to work so hard for something. We just have to take it one moto at a time for the rest of the year. Everyone’s speed is really good right now.”

Villopoto’s runner-up effort was his eighth podium result of the season through eight rounds, and he remains the only rider in the series with that distinction. Additionally, he assumed the points lead after Honda’s Chad Reed, of Australia, finished fourth overall (7-4).

“Ryan (Dungey) was riding better than me in the second moto,” said Villopoto. “He had some better lines. But, it feels good to have the red plate (and points lead). It’s a big step, but we still got some things to work on, and we’ll continue to try and improve. I haven’t won here at Washougal yet, but everything was going well. I just didn’t have it there at the end of the second moto.”

Suzuki’s Brett Metcalfe rounded out the overall podium, with his best finish of the season in third (4-3).

The opening moto of the 250 Class featured an impressive effort by Baggett. After slotting himself behind Yamaha’s Ryan Sipes., early, Baggett eventually moved into the lead on Lap 5 and never looked bag, putting him in position to claim the overall.

In moto two, Baggett’s Kawasaki team-mates Dean Wilson, of Scotland, and Tyla Rattray, of South Africa, assumed the top spots, and quickly began a battle for the moto win that would go on all the way to the finish. While his teammates pulled away from the field, Baggett was forced to fight from a ninth-place start.

He continued to work his way through the top 10, even overcoming a fall, and eventually moved into third on Lap 13, which solidified the overall win.

“The second moto was typical for me,” said Baggett. “I got a bad start and made my life hard. I had a crash – just a tip over – but I was forced to pass some people back. It turned out good, but I had no clue I won. I saw third on the pit board, but I thought I needed it to get on the podium. Hopefully I made up some points, but I’m going to just keep doing work and head to Unadilla.”

Out front, Rattray continued to look for opportunities to pass Wilson, knowing it would assure him the overall. On the final lap, he closed to within inches of his team-mate, but ultimately had to settle for second in both the moto and the overall standings (2-2). On the heels of his moto win, Wilson secured third (5-1), maintaining his lead in the 250 Class standings.

“My finishes have been good, and really consistent,” said Wilson. “I need to put two motos together. It seems like you need to go 1-1 to win. But, consistency is what it takes to win championships, even though I would like to get some overalls.”

Currently, 13 points separate Wilson from Rattray in the championship. Baggett sits an additional four points back. The Monster Energy/Pro Circuit/Kawasaki team maintains a perfect record through eight rounds this season.