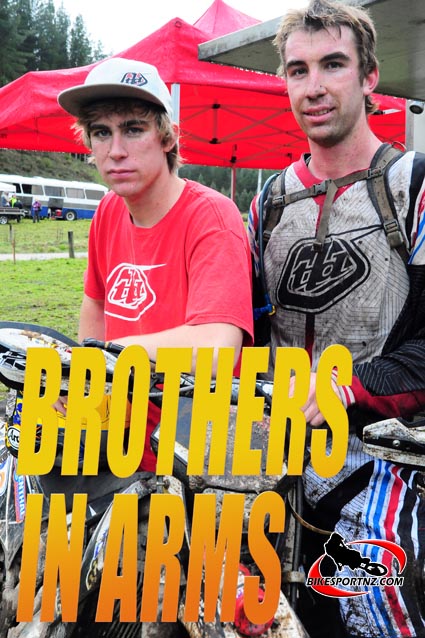 They live together, they work together and they race together … and even on the race track there is not much to separate sibling rivals Mitchell and Damon Nield.

The Hokianga men, who run their own building firm during the week but race for Triumph New Zealand at the weekends, both celebrated wins this season when the New Zealand Enduro Championships wrapped up at Wairakei, just north of Taupo.

It has been a virtual civil war in the Experts under-200cc two-stroke class all season long with Mitchell Nield (Gas Gas EC125) and Damon Nield (Husqvarna CR125) battling throughout the six-round series to take the top spot.

As it transpired, the 23-year-old Mitchell had done enough before Taupo’s finale to have wrapped up the national title early, but his 20-year-old brother Damon was still determined to secure the runner-up placing.

Although Damon Nield suffered from a head cold at the final round, the pressure eased as his nearest rival, Auckland’s Callan May (Yamaha YZ125), came unstuck with brake problems.

Despite his illness, Damon Nield still managed a courageous seventh overall at Taupo, the first of the small bike riders, and he snatched the runner-up position for the championship.

Mitchell Nield also had serious issues to deal with at Taupo, dirt getting into his carburettor and forcing him to stop for nearly half an hour to clean and reassemble it. He had to stop a passing rider and borrow pliers to complete the job.

But it all worked out for him in the end because he didn’t even need to even race this final round to take the title.

While the national titles went 1-2 in Mitchell’s favour, the positions were switched around in their fight for glory in the parallel Northern Top Trail Rider Series, that competition also wrapping up at the Taupo event, with Damon winning the under-200cc two-stroke crown by just one point from Mitchell.

And no sooner was the ink dry on their respective championship certificates and they were already planning their next racing adventure.

Mitchell has support from a group of Northland businessmen to go to the Kingdom of Lesotho in South Africa to contest the Roof of Africa Extreme Enduro in November.

He has previous international experience, having won silver and gold medals racing in the Australian Four-Day Enduro in recent years but this will by far be his biggest overseas adventure.

“It is all very exciting for him,” said his mother, Kiri. “It means he will be able to take his racing to that next level.”

It is expected that Damon will make the trip to the Roof of Africa next season.