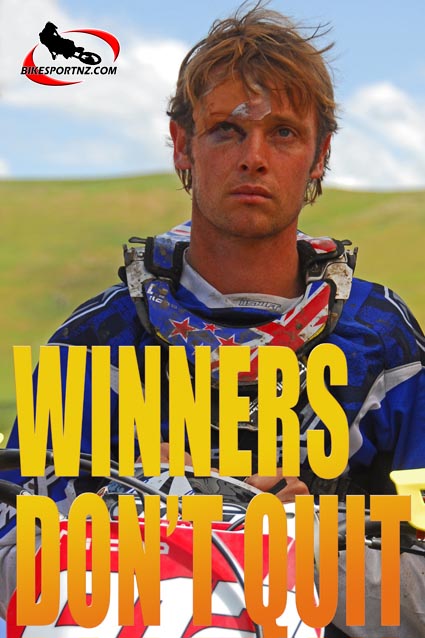 Kiwi motocross hero Josh Coppins once said that “championships are won on your bad days”.

And it got us at BikesportNZ.com thinking, how many times have we seen title contenders have a huge “moment”, a shock-horror afternoon or score an own goal (run out of gas in sight of the finish line or drop the bike in an easy corner just before the chequered flag) … but we then see these riders go on to win the title?

We can recall Daryl Hurley getting a big rock in the face during a motocross nationals round in Hawke’s Bay a few years back, in 2007 actually. Obviously in pain and with vision out of only one eye, he came out to race the next moto anyway and scored a handful of points.

It was well below vintage Hurley (pictured above) but it turned out that those few points were enough to give him the New Zealand MX1 title that year.

It was a classic example of “winners don’t quit”.

A similar thing happened at the fourth and final round of the New Zealand Cross-country Championships in a rain-swept and muddy Taranaki in May.

Defending champion Adam Reeves had a shocker. He put himself back down the field after he shot off the track and down a steep bank. Mistake No.1.

Conditions here were appalling. Visibility was poor with constant drizzle only broken up by occasional downpours. The soil was porridge.

“It was that steep I figured I would have to lift the bike back up onto the farm track, but, given that the bike weighs 105kg plus, and add say 10kg of mud, it wasn’t going to happen, so I walked the bike round the side of the hill until finding away back up,” Reeves said.

“I had now lost a lot of time but, moving on to the second lap, I was back on the gas and beginning to get some positions back when I took what I thought was a decent line though a water hole, but it actually turned out to be a total bike trap. I had to lift my bike out of thigh-deep mud and water.”

So that was mistake No.2.

“By now I was really pissed, and began to ride like a madman, which wasn’t the best move as I launched into a water hole way too fast and effectively drowned my bike,” said Reeves”

That was mistake No.3 and, by this stage, any normal human being would have given up.

But no, Reeves spent at least 10 minutes fruitlessly trying to restart the bike. He had no option then but to give up, or so he thought.

“I resorted to helping stuck riders get out of the same water hole that had claimed me. I figured my championship hopes were all but gone.

“Then, 20-minutes later, another rider told me that both of my main rivals had pulled out due to their bikes breaking down. I figured I best give my bike another try, and, unbelievably, it fired straight back up. I was back in it.

“I got back to the pits, much to everyone’s surprise, and my crew informed me that the championship was mine and to just go back out and complete a final lap.”

“By now the track was a total nightmare and bikes were stuck and broken down everywhere. I rode cautiously because all I wanted to do was finish.”

Chaos reigned and one hillside in particular had become virtually impassable.

“A lot of riders were giving up and coming back down to take the shortcut home.

“I didn’t want to give anyone a reason to disqualify me so taking the short cut wasn’t an option. I thought I was sweet but then I felt the clutch let go, so I quickly shut the bike off in the hope it would cool down and become operational once again.

“It was a lonely 10-minute wait on this nightmare of a hill and I had visions of being stuck out there until dark, but, once again my bike came back to life and I was able to continue.”

As it turns out, Reeves would later discard that result anyway (as only three of the four rounds would be counted), but with his main rivals failing to finish that day, the points Reeves had scored at the previous rounds were enough to give him his third straight outright New Zealand Cross Country title.

There is another example of “winners don’t quit and quitters don’t win” when we look at what happened to Josh Coppins at the opening round of the Australian Motocross Championships at Broadford, in Victoria.

Josh had a lacklustre day, by his own high standards, certainly he finished below where we would have expected him to be … a lowly seventh overall for the day.

But Coppins didn’t give up and, after a couple of winning rides at the following two rounds, he was on top of the standings. There is still some way to go in the Australian series and, at the moment at least, he’s third in the rankings and we don’t know where he will eventually end up, but we can guarantee one thing … he’s no quitter.

We guess the moral of the story is “never give up”.