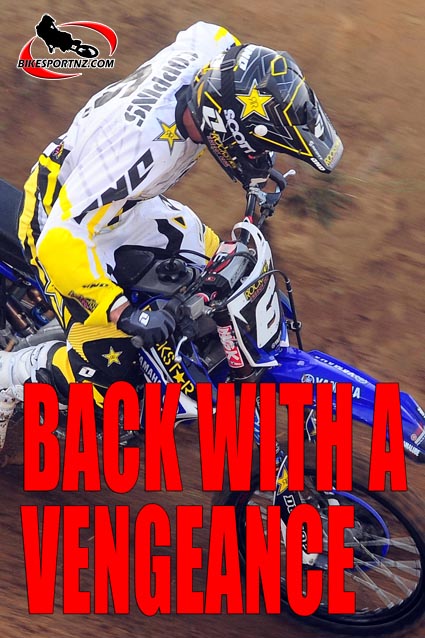 It has been a long time between drinks for Motueka’s Josh Coppins, at least at the Michael Godfrey Memorial Motocross it has.

The Yamaha ace last raced at the iconic South Island event since 1994, just before he left New Zealand to begin crafting a successful career racing the world championship scene in Europe.

He won the day at the Michael Godfrey Memorial Motocross just north of Christchurch on Sunday, taking his MXDK Rockstar Yamaha YZ450F to beat some of the country’s leading MX1 class pilots, including former national champions Michael Phillips (Honda), of Rotorua, and Christchurch’s Justin McDonald (Honda).

As well as winning the MX1 class with 1-2-1-1-1 results, Coppins also won the event’s feature race, finishing that race ahead of Phillips, McDonald, Nelson’s Jared Guthrie, Christchurch’s Andy Blanchard and Nelson’s Shannon Hewetson, with Gisborne’s Matt Hunt bringing his 250cc two-stroke Yamaha to the party as he finished seventh.

After nearly 20 years away – but with numerous GP wins and two world championship runner-up finishes (in 2002 and 2005) to show for it – Coppins returned with his new family to this part of the world late last year. His first big win back home was at the annual Woodville Motocross GP in late January.

The Michael Godfrey Memorial Motocross at Waipara, just north of Christchurch, was another event he had long wanted to revisit.

“It is very much as I remember it, mostly good old-fashioned natural terrain track, although they have added a couple of jumps,” said Coppins.

“This is the premier South Island motocross event and a thrill to ride.

“It was great to catch up with some old friends and also to put of a show for the good-sized crowd. To think I have not raced here since 1992 … I was just a kid, on an 85cc bike back then.”

Also back in 1992, a fresh-faced Coppins was the national junior 85cc motocross and supercross champion in the 14-15 years’ category.

“It was great to come back here and have a win. I raced the Yamaha to its full potential, got great starts and really clicked with the bike.

“I’m back in Australia now, testing the Yamaha ahead of the next round of the Australian nationals. I really need to be at my best over the remaining rounds in Australia. I’ve got a bit of catching up to do.”

Racing for the CDR Rockstar Yamaha Team across the Tasman, Coppins is currently third overall in the Australian Motocross Championships after five of nine rounds.

Round six of that series is set for Coonabarabran, NSW, on June 19.