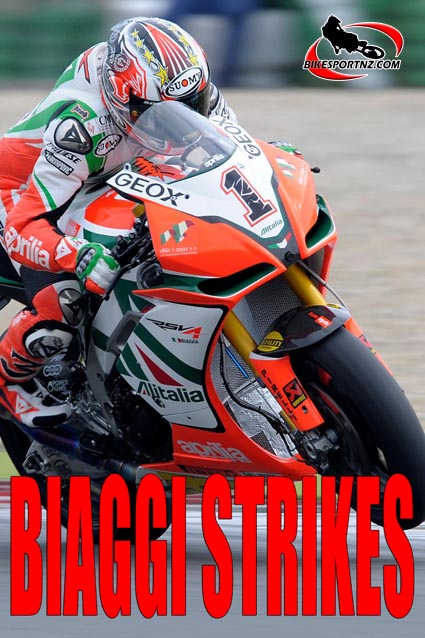 Italy’s Max Biaggi has won his first World Superbike Championship race of the season at Motorland Aragon in Spain at the weekend, the reigning champion making amends for his race one mistake by instead forcing rival Marco Melandri into an error.

Biaggi led from the first corner right to the chequered flag, though he spent three-quarters of the second encounter being shadowed by race one winner Melandri, forcing him to keep things neat.

Indeed, Biaggi, whose costly mistake just four laps from home in race one allowed Melandri to sneak through to an eventual victory, looked strong from the start as he swept into the opening bend with the lead.

Pole sitter Melandri held onto second, despite a brief moment when Tom Sykes muscled his way between them, the pair proceeding to sprint into another comfortable battle for the lead.

Similarly to the first race, Melandri maintained close company with Biaggi through the corners, but he appeared to be losing out most crucially down the back straight, preventing him from launching an attack.

As the race reached its closing stages, Biaggi was coolly resisting Melandri’s attentions, a challenge that was rewarded on lap 15 when the Yamaha rider made the error into the first turn. Coming close to losing the front-end, Melandri collected the YZF-R1 to resume in second place, but five seconds was lost to his rival.

It was more than enough for Biaggi to ease home the winner, his first win this season having occupied the second spot on the rostrum eight times already.

A strong points’ haul for the Aprilia rider, though series leader Carlos Checa limited the damage to his advantage with a fairly quiet run to third, Biaggi comes away from Motorland Aragon having reduced the margin from 75 points to 43 points.

Indeed, Checa – who crashed out of the first race – didn’t have an answer to Biaggi and Melandri, but was able to recover to third after getting bundled down the order initially.

2011 World Superbike Championship rider standings (after round 7 of 13, previous round position in brackets)