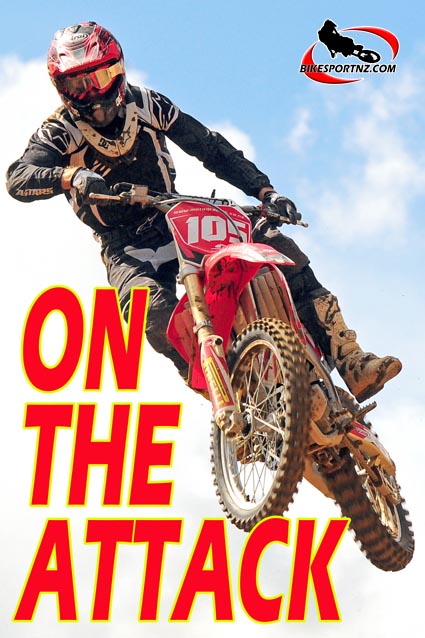 New Zealand’s Michael Phillips is hoping to better his 2010 third placing with a win at round three of the Australian Motocross Championships at Raymond Terrace this weekend.

Mounted aboard a CRF450, the Carlton Dry Honda Thor Racing team rider, who has previously raced the Lites (250cc) class in Australia, has shown he is very much more at home in the Pro Open class.

The quietly-spoken Kiwi, from Rotorua, in the Central North Island, who finished third in the MX1 class at the New Zealand motocross Championships a fortnight ago, narrowly missed a podium placing at Appin last weekend but says the Hunter-regional track is a personal favourite.

“I am really looking forward to Raymond Terrace this weekend. It’s a track I enjoy and I finished on the podium there last year,” Phillips said.

“I have had a good couple of days riding back home in New Zealand. For me this is my fifth consecutive weekend of racing so I have taken it a little easier in the lead-up.

“With four sprint races each weekend there is a long way to go and it is so important to be consistent and not make mistakes. Last weekend showed it is consistency and not necessarily race wins that achieve silverware,” he added.

Team-mate Cheyne Boyd who currently sits fifth in the Pro Open Championship has spent much of this week testing with the Carlton Dry Honda Thor Racing Team.

With the focus being rideability and starts, the team tested a number of engine configurations ahead of this weekend’s event.

Boyd said he was happy with the changes and saw an immediate improvement in his starts.

“I was fairly disappointed with last weekend,” Boyd admitted. “I have the speed and pace to run up front but when you are starting mid-pack it makes it really hard.

“We tested this week and the team made some changes to the engine configuration and I have felt a big improvement.

“The stuff we have changed has really helped me with my starts so I am looking forward to putting it all into play on Sunday,” Boyd added.