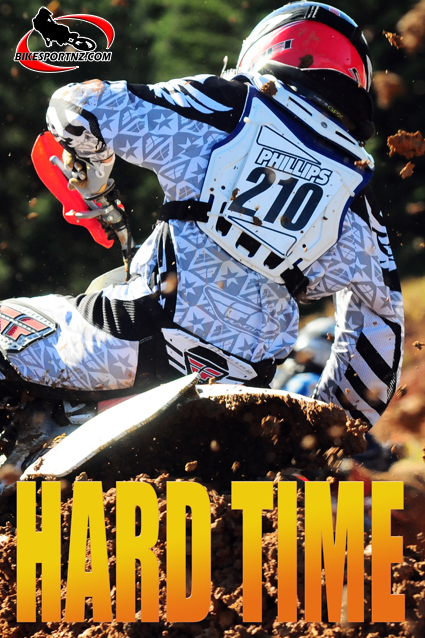 It was a tough introduction to top class international motocross for Kiwi trio John Phillips, Bjarne Frederiksen and Kieran Scheele in England at the weekend.

Racing at round one of the British Motocross Championships at Exeter, the Kiwi riders had superb support from expatriate New Zealander Rex Michau, the former Hawke’s Bay man the head of the Team NZ DBG Suzuki team.

The Kiwi team arrived at the Little Silver track in Exeter early Saturday morning and set up. They had one of the biggest and most impressive pit set-ups.

They walked the track, checked over bikes and readied themselves for the racing proper the following day.

Although the track had been well prepped, Rotorua’s Phillips didn’t manage to put a whole lap together cleanly and was disappointed in qualifying only 31st in the MX2 (250cc) class, but he was looking forward to the three 20-minutes plus two-lap races to prove himself better than that.

Racing in the MX1 class, Fredericksen and Scheele also qualified outside the top 20.

Phillips had 30th gate pick and found himself jammed right on the inside as the MX2 class lined up for race one. He got a good jump out of the gate but, as he entered the first corner, the rest of the field came across him and shut him off.

He said he was not sure quite what happened next but he ended up on the dirt, his bike’s radiator damaged and he suffered a huge bruise on this thigh for his efforts. He was unable to continue the race.

After icing and stretching his rapidly-swelling leg, Phillips lined up for race two determined to salvage what was left of the day but, once out on the track, he realised he couldn’t bend his knee enough to ride, let alone be competitive, so he withdrew and pulled back into the pits.

That was the end of his day and race three was not an option for him.

Despite the disappointment, Phillips said he could still take plenty of positives from the day.

“I now know what I’m in for and I have a real appreciation for the depth of UK racing.

“The bike set-up was good and I just need more time on it. The pit set-up was great and the mechanic and pit crew worked well together.”

The Kiwis now race again, this weekend, at the first round of the British Masters Championships, a similar and parallel series to the nationals.

Taupo’s Emma Davis is also now with the Kiwi team in the UK.

She is working three days a week as an engineer for the team and will contest the women’s class at the remaining rounds of the British Champs.