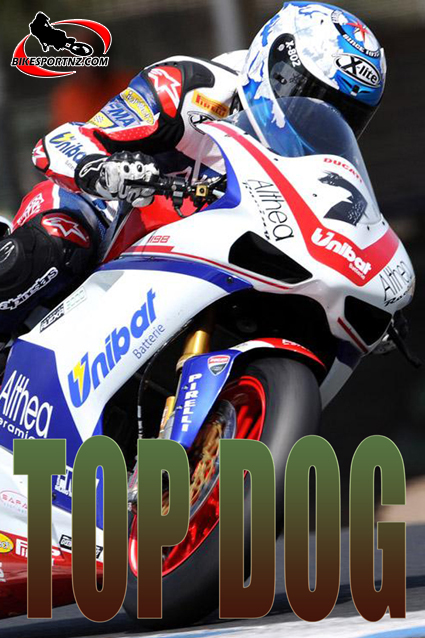 Spain’s Carlos Checa became the first rider since Neil Hodgson in 2003 to win both races at a World Superbike Championship season opener, winning both legs of the 2011 season opener at Phillip Island on Sunday.

Checa (Ducati) has barely put a wheel wrong as he topped all but one session through the weekend.

Two race wins means he leaves Australia with a full quota of 50 points, though he may be a little disheartened to see he only commands a fairly slim 10-point advantage over Max Biaggi (Aprilia), who kept Checa honest with two second place finishes.

“Here we have something extra, maybe the bike works really well at this track and I like it as well. We did a great job in testing, practice and qualifying but you never know, conditions can change. I made a gap, controlled the race, went fast lap by lap, but it’s a fantastic winning start for me and the team,” said Checa.

Performing well around a circuit that Biaggi insists doesn’t suit the Aprilia RSV-4, it’s worth noting that the reigning champion scored just 19 points at Phillip Island in 2010.

Leon Haslam (BMW) and Marco Melandri (Yamaha) shared third position after claiming a third and fifth place finish each, the latter proving particularly impressive on his Superbike debut in which he wasn’t afraid to get stuck in from the start.

Michel Fabrizio (Suzuki) was fifth after two solid top-10 finishes, ahead of Jonathan Rea (Honda) and Noriyuki Haga (Aprilia), while Tom Sykes finished eighth after keeping himself out of trouble aboard the Kawasaki.

In all, 18 riders scored in Australia – including the two wild-card riders Bryan Staring and Josh Waters – with just Joan Lascorz, Mark Aitchison, Sylvain Guintoli and Maxime Berger failing to get on the scoreboard.