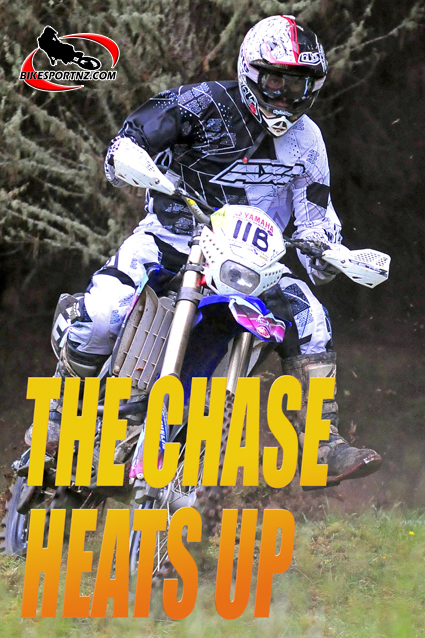 It was business as usual for all the main players at the fourth round of six in this year’s New Zealand Enduro Championships in Northland on Saturday.

Taupo’s Rory Mead took his Yamaha YZ450F to yet another outright win, no doubt pleasing his bosses at Yamaha, the series sponsors, as he further strengthens his grip on the crown.

Saturday’s venue, just north of Whangarei, featured a wide variety of challenging obstacles and, as Motorcycling New Commissioner Gary Powell observed, “nobody would have left disappointed”.

“The Nield family and their helpers did a great job of setting out this 100-kilometre plus course. It was only about 107 kilometres but it felt like 207. It took the riders through a lot of native bush around an estuary and the average speed was pretty slow, meaning it was pretty tough going in places and included a few very steep climbs.

“As for the results today, there were really few surprises. The cream still came to the top.”

With Mead now 11 points in front with just two rounds remaining, Power knows he may have to content himself with winning his class and possibly not take the outright honours this year.

“It was hot, dry and dusty today,” said Power. “Even so, it was slippery on many of the tree roots because it was still quite moist in places. I’m still winning my class and was only about three seconds behind Rory in each of the special tests … but with 11 special tests, those three-second margins do add up.

“I’ve really got my work cut out to stay ahead of Adrian (Smith) and retain my class lead. He’s going pretty quick.”

Meanwhile, Auckland’s Michael Skinner (KTM) won his over-200cc two-stroke class on Saturday and extended his lead at the top; Tauranga’s Reece Burgess (Husaberg) finished third in his over-300cc four-stroke class on Saturday and saw his championship lead shaved to seven points, while Tokoroa’s Sean Clarke (Yamaha) enjoyed another class win to boost his advantage at the top of the veterans’ class.

Round five of the Yamaha-sponsored series is set for Riverhead Forest, north of Auckland, on June 5.