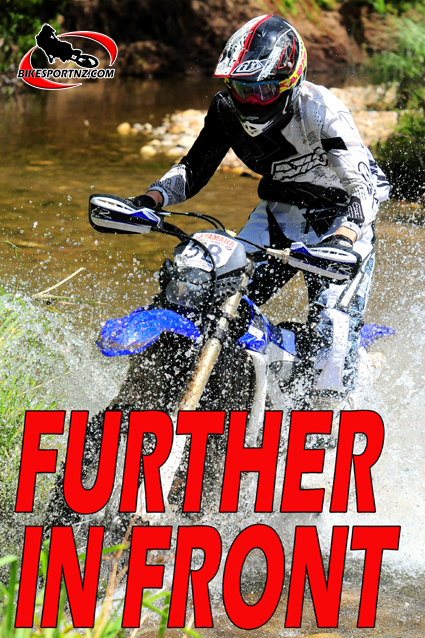 When the going gets tough, the tough get going.

It was a fierce battle for dirt bike supremacy at the third round of six in this year’s Yamaha New Zealand Enduro Championships at Whangamata on Saturday and it was Taupo builder Rory Mead (Yamaha) who emerged on top, strengthening his grip on the outright lead.

Mead (Yamaha YZ450F) not only won overall but took over-300cc four-stroke class honours as well. Mead looks now to be well on target to win the outright title he last held in 2009 and possibly also to win the over-300cc title for the first time. He raced a 250cc Yamaha during the 2009 season.

Power said he was satisfied with his performance on Saturday.

“I rode as hard as I could and managed to stay on the bike … that’s a good thing,” he said.

“The special tests were quite long, so rider fitness came into it a lot. I’m happy to win my (under-300cc four-stroke) class and to finish second overall. Obviously it would have been better to win overall today … I’ll just have to watch for Rory making a mistake at one of the remaining two rounds.

Saturday’s course took riders through some amazing Coromandel scenery and the picturesque terrain was possibly a distraction to some riders, although no serious injuries were reported.

“Tree roots became exposed on the second loop around the track and that made things interesting. A lot of riders soon realised they were not as fit as they thought they were,” said Motorcycle New Zealand enduro commissioner Gary Powell, himself a rider, finishing fourth overall in the expert veterans’ class on Saturday.

Round four of the Yamaha-sponsored series is set for Northland on March 12.