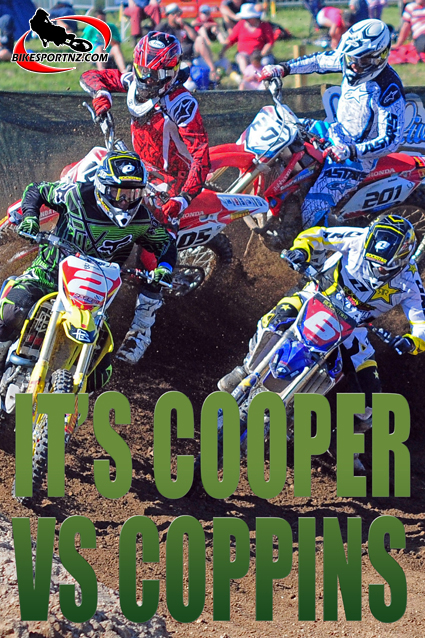 “The first step in our mission is complete.”

It was with these words that MXDK Rockstar Yamaha Team boss Darryll King summed up racing at round two of the New Zealand Supercross Championships in Taupo on Sunday.

Motueka’s Josh Coppins (Yamaha YZ450F) finished a close runner-up in the open class at Taupo – beaten by just one point by arch rival Cody Cooper (Suzuki RM-Z450), of Mount Maunganui – but it was easily enough for him to wrap up the North Island Championship segment of the series.

It also meant Coppins had extended his lead in the hunt for the national title and he is now 13 points ahead of new No.2 rider Cooper with just two rounds remaining.

“That’s part one over for us, we have the North Island Supercross Championship title in the bag,” said King.

“Now we can concentrate on winning the South Island half of the series and, hopefully, taking the national title in the open class as well.

“After that it is the Woodville Motocross (on January 30) and the national motocross championships. We know, though, that we do have a real battle on our hands.”

It was a sparkling performance from Power Balance MotoGB team rider Cooper at Taupo as he finished 3-1-1 in his three open class outings.

“It would have been good to win all three races today, but I can’t complain,” said Cooper afterwards.

“I crashed while leading the first race and ended up third, so that was costly. But I’m in a solid position in the championship now.”

Coppins was also well satisfied with his campaign.

“It was a pretty easy track (at Taupo) and I’m happy that steady riding allowed me to get the job done,” said the 33-year-old former GP motocross star.

“I just need to keep riding smart and get good points on the board. If I get enough of a buffer, perhaps I can relax a bit at the final round.”

The competition now crosses Cook Strait for the second half of the series, the two South Island rounds, at Coppins’ home track near Motueka this weekend and, finally, at Timaru a week later (on January 15).

In the Lites (250cc class), Christchurch’s Craig Smith (Honda) pounced at Taupo, winning all three races to take the North Island tile and also snatch the lead in the national championship. He is now 13 points ahead of Taupo’s Nick Saunders (Kawasaki), with Tauranga’s Peter Broxholme (Honda) just three points behind in third.

In the junior 250cc class, Atiamuri’s Dion Picard (Suzuki) ruled the day at Taupo, winning all three races to take the North Island title and build a 16-point lead over Rangiora’s Micah McGoldrick (KTM) in the chase for national honours.

Meanwhile, Hamilton’s Josiah Natzke (Yamaha YZ85) won the junior 85cc class at Taupo, making it five wins from six races in the series thus far, clinching the North Island crown for the class and also extending his lead to 20 points over Pahiatua’s Scott Sowry (Kawasaki) in the chase for national championship honours.