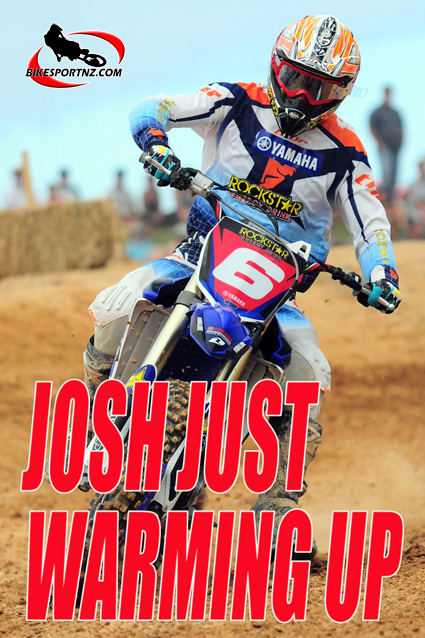 It has been a tough re-introduction to life in New Zealand for recently-returned Grand Prix star Josh Coppins, but he’s not losing any sleep over it.

Yamaha’s Coppins, who wrapped up his 15-year world motocross championship career at the end of 2010 to return to life in his hometown of Motueka, has raced three major events in New Zealand in as many weeks and not with the results he perhaps expected.

But luck has been against him in the two big events that followed, the rain-lashed Whakatane Summercross four days ago and the stand-alone New Zealand Open Supercross near Te Puke on Thursday evening.

He finished an unaccustomed fourth overall at the Whakatane motocross and a close runner-up at the Te Puke supercross.

“I should have had three wins by now,” lamented Coppins. “I’m just struggling to gel with the new tyres I’m using … I crashed five times in one race at the Te Puke supercross when I lost the front end.

“I caught back up to the leaders but then blew it again. I think I’ve shown I’m the fastest rider on the track but that’s no good if I don’t stay on the bike.

“Fortunately the Whakatane and Te Puke events are not really that important to me … I’m just using them as practise, to get more bike time. It’s the national championships that are most important and I’m leading the supercross championships at the moment so that’s good.

“When I do get things right, these guys had better watch out.”

In addition to the New Zealand Motocross and Supercross Championships series, Coppins will also race at the stand-alone Woodville Motocross at the end of January, an iconic event that celebrates its 50th anniversary this season.

Coppins previously won the big Woodville event in 1996, 1999, 2000 and 2008, during those rare spells when he was home from his European campaigns.