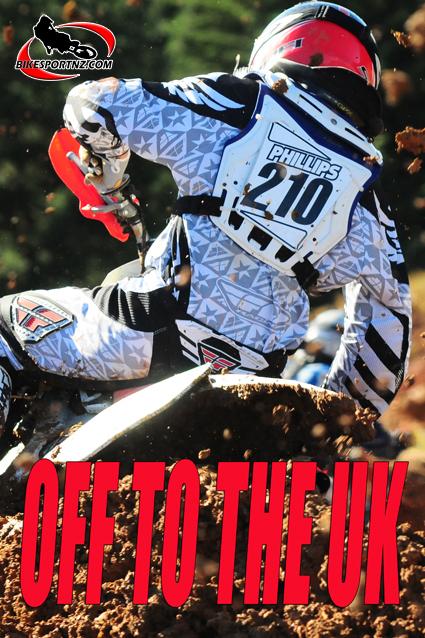 Young Rotorua motocross racer John Phillips could be heading for the big time.

After having a full-sized supercross track constructed on his parents’ Rotorua farm, he has been putting in countless hours of training to prepare for the upcoming New Zealand Supercross Championships.

But that’s only part of the story … for 2011, the 17-year-old will be following his elder brother Mike’s wheel-tracks and racing in the United Kingdom.

He will ride a Suzuki RM-Z250 for the Team NZ DBG outfit, based in West Sussex, south of London.

“I am still riding the Honda CRF250 but I have just had the suspension changed for supercross and have been putting in the hard yards to be ready for the first round of the NZ Supercross Championships at Tokoroa on December 11.

“I will be racing my 2009-model bike at Summercross (at Whakatane) to save changing the suspension. This weekend, however, I will be racing Mike’s CRF450 at the Taranaki Motocross Champs.

“Mike let me ride it a couple times in the last month when I was waiting for parts for the 250 and I really enjoyed riding it.

“For 2011 I will be racing in England.  I have been blessed to be selected by the NZ DBG Suzuki team to race the British Champs, the Red Bull Champs and if my results are up to it there may be a shot at a Grand Prix.

“I am so stoked to get the ride and am putting everything into being prepared. It’s great to have Mike helping me out as I don’t think there is anyone more focused on pre-season training and race preparation.  I’m not sure what I can do to get used to the freezing temperatures over there except to tough it out.

“I am really looking forward to the challenge of British racing and see it as getting me another step closer to becoming a World MX Champion. A huge thank you to (Team NZ DBG owner/manager) Rex Michau for this opportunity.

“As for school, I got my leaving certificate last week. I have my NCEA level 3 and my UE.  It was the co-curricular prize giving last night and I was awarded Sportsman of the Year 2010. It was a pretty cool way to finish my school years.”

The riders will be expected to train to win and with DBG having ACU coach, ex-British Champion and GP rider Jason Morris, as coach and coordinator of riders it will bring huge experience during mid-week practice days in the UK and Belgium. Morris rides the veterans’ grade now at top British level and will ride some FIM rounds in 2011.

Scheele (ranked NZ MX2 No.10) will vouch for the chance he was given with the team in the 2010 season. He rode with world champion riders on practice days in Belgium, in deep, ugly sand and also raced against the UK’s best, including GP riders such as Jake Nicholls and Latvian star Matiss Karro.

“The riders may leave the team at any time should a more major team, such as Red Bull KTM or Teka Suzuki, choose them,” said Michau.

“The knowledge of us succeeding in bringing Kiwi riders to the world stage is enough reward for us. We will have 2-3 reserve riders on call so if a rider is injured we can call on the reserve.”