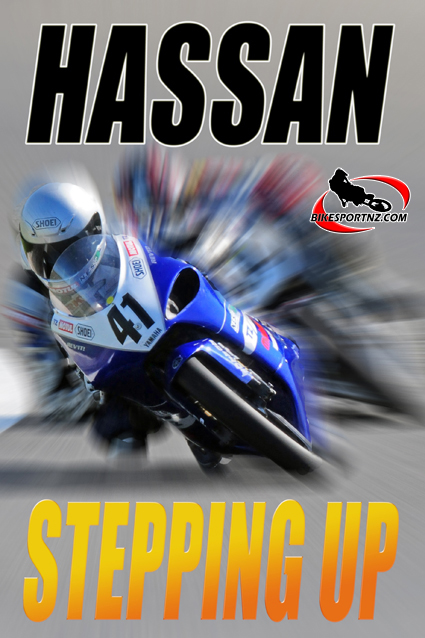 Auckland teenager Jaden Hassan is stepping up a class in 2011.

The 16-year-old Yamaha racer from Westmere has twice finished third in the 125GP class at the New Zealand Road-racing Championships – in 2009 and again this year – but now he’s on a 600cc bike and determined to enjoy the same sort of success he enjoyed racing the 125cc machine.

He’s still very young, but, at the lofty height of 6’ 3” (190 cm), Hassan has easily outgrown the small bikes and will now campaign a more meaty Yamaha R6 in the 600 Super Stock class this coming season.

Hassan only picked up his 2010-model Yamaha R6 a little over four weeks ago but he has wasted no time at all in getting acquainted with the new motorcycle.

In his first time out he raced at a wet Pukekohe track and won by an impressive five seconds over his main rival. He’s now also raced the bike at Hampton Downs, near Meremere, and, just last weekend, spent two days racing at the opening round of the Pacific Motorcycle Club’s Summer Series at Manfeild.

He won his races at Manfeild by a staggering 12 seconds.

“I love the bike and feel really comfortable on it. I am having so much fun,” said Hassan, who is sponsored in his racing by Yamaha New Zealand, Ricoh and the Documentary Channel.

“I always saw the 125cc class at a stepping stone to me getting on bigger bikes. I want to continue my forward momentum and see what comes of that.

“I thought, when I first went out on the 600 that I would be chasing other riders but that didn’t really happen. They were chasing me.

“I want to be fighting for podium finishes again in the nationals this year, this time on the 600cc bike.”

Former national champion and tuning expert Dave Cole, of Auckland, is also helping Jaden and his father Greg to keep the bike in race trim. Cole will travel with the Hassans when the five-round nationals kick off at Levels Raceway, near Timaru, on January 30.

Hassan will also race the Tri Series, which kicks off at Hampton Downs December 11.