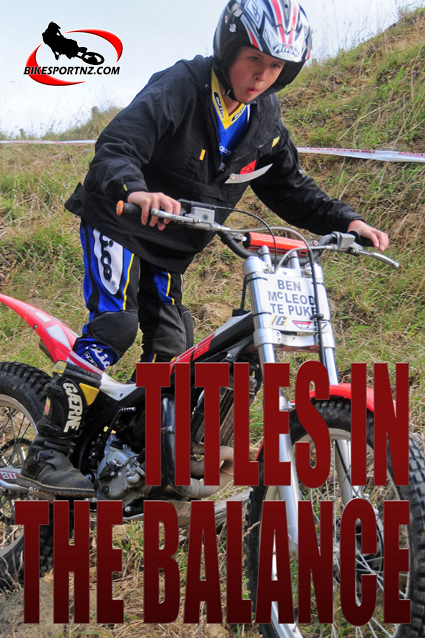 Motorcycle titles are in the balance at rounds seven and eight of the North Island Moto Trials Championships in the Bay of Plenty this weekend.

The Beta Novagar-sponsored series kicked off in Taranaki in March and continued with competition near Hastings and Havelock North in April and then rolled on to rugged terrain near Hamilton in June. This weekend the riders flock to compete at two venues near Tauranga and Te Puke.

There is probably no looking past Wellington motorcycle ace Jake Whitaker to dominate this coming weekend. But, while the Kiwi international is clear favourite to win, that won’t prevent some very big hitters from taking aim at the talented young man from Wainuiomata.

Foremost among those expected to threaten the 17-year-old Whikater is likely to be seven times former national champion Warren Laugesen, of Levin, and would also be foolish to count out Taranaki’s Wayne Thompson, Wellington’s Shane Clarke, Nelson’s Nick Oliver or Motueka’s Karl Clarke in challenging for expert grade honours as well.

A top line-up of riders is expected for the two-day event with organiser Mike Gundry, of Tauranga, promising the terrain will pose a wicked challenge, even for classy world championship contenders such as Whitaker.

“Day one on Saturday is at Grayling’s property on Hereford Road at Oropi, just outside Tauranga, the course set out mainly along a river bed, with a nice rock section that always proves popular with the riders,” said Gundry.

“The next day is on No.4 Road, Te Puke, just off State Highway 2. There’s a bit of everything to be had there. It’s a mix of woods, a quarry and a bit of river bed too.”

Intermediate grade action is likely to centre around Auckland’s James Snowdon, with Rotorua’s John Haynes keeping him honest, while the presidents’ grade should belong to Tauranga’s Warrick Merriman, although Te Puke’s Paul McLeod and Paraparaumu’s Kevin Tither will also be in the hunt.

A junior rider to watch for will be South Islander Brady Henwood, although Tauranga’s Jacob Gundry and Te Puke’s Ben McLeod should also feature.

With this sport, the emphasis for this sport is not on speed, with the prime aim to conquer the extreme terrain without touching feet on the ground or falling off. Points are lost for these “faults” and a rider with the lowest score wins.

Access to both days’ riding will be signposted from the respective main roads. There is no charge for spectators. Riding starts at 10am on both days.