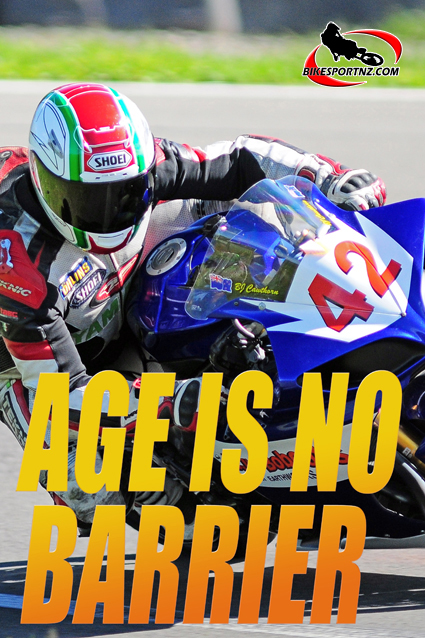 His name is William but everyone knows him simply as BJ.

A popular character on the motorcycle road-race scene, 42-year-old BJ Cawthorn is the first to tell you that age is no barrier when it comes to racing motorcycles.

“I’ve only been racing four years but, thanks to help from (Whakatane’s former national superbike champion) Tony Rees, I’ve been going okay.”

His two biggest claims to fame in that time? “Not re-marrying,” he smiles, “and managing to keep up with my mentor, Tony (Rees), at a recent Pacific Motorcycle Summer Series race meeting at Taupo.

“Tony got first that day, racing a 1000cc Yamaha R1, and I finished second overall, on a 600cc Yamaha R6. That was pretty cool.

“I stayed up with Tony for about three or four laps … and learned a lot from that. Then, just talking with him afterwards, it was more of a chance to learn stuff.

“I’ve only done rounds one, three and five of the Victoria Motorcycle Club’s Actrix Winter Series but I’ve been doing okay.

“I’ve been around motorcycles all my life, either dirt bikes or road bikes, but only gotten into racing proper in the past three or four years. It’s such a great, family-orientated community and, by racing in controlled circumstances, it’s entirely safe.”

It’s interesting to note that the No.42 on Cawthorn’s bike has special significance.

“When I bought my first bike it had the number 42 on it. Then I was aged 42 when I had my first crash – nothing serious — and, believe it or not, it was my 42nd race meeting. How’s that for coincidence?”