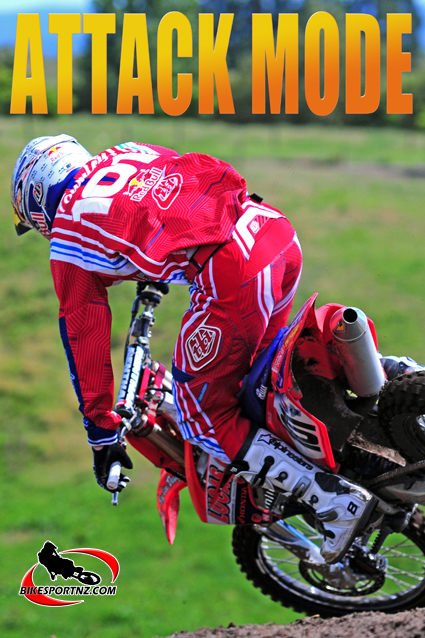 New Zealand’s Ben Townley remains locked in fifth position in the 450cc class motocross standings in the United States after the ninth round of 12 at Unadilla, near New York, on Saturday.

Tauranga’s Townley (Honda) started the weekend fifth in the rankings and that’s where he remained after posting seventh and ninth placings in his two outings on Saturday.

It was a vast improvement on what happened at the previous round – when he had failed to score any points because of a serious crash – and he can probably count himself fortunate that he could limit the damage of that disaster with solid results at Unadilla.

He is just 11 points behind Yamaha’s Josh Grant, with just three rounds (six races) remaining to close out the championship.

Grabbing a good start in moto one, Townley was comfortably positioned behind Yamaha’s James Stewart as he gave chase in the opening stages of the race.  As Stewart passed Honda’s Andrew Short, Townley maintained his 5th spot for a while, until he made some mistakes allowing Australian Brett Metcalfe and Grant to get by.

A similar fate awaited Townley in moto two as he held 6th spot for quite some time, before losing some places towards the end of the 30 min + 2 lap race.

“This has been a really tough day for me” admitted Townley. “I had limited riding preparation coming into the event and I guess the two weeks I had off the bike after my crash in Washougal have caught me out.

“I just could not find my rhythm in either moto and did not want to go over my capabilities.  We tried to find some settings that worked for me during the motos but it didn’t seem to help. Looking at the positive side I know where I can improve and we’ll be working hard this week to make sure I have the best setup for Southwick next weekend. I’m looking forward to riding in the sand again!”

After grabbing the holeshot in the first premier class moto, Dungey never looked back, continually extending his advantage over the field to the chequered flag. In moto two, the rookie worked his way into the lead after a top five start, engaging in a great battle with team-mate and World Motocross Championship contender Clement Desalle, of Belgium, to secure the moto sweep in the late stages.

“I got a good start in moto one and put myself in position to lead laps and take the win,” said Dungey, who can wrap up the title at the next round. “I wasn’t thinking of the overall (in moto two). I just race to win every time out. Clement (Desalle) surprised me. It’s not easy to come over (to the US) and do well. It was good for him and good for us to have a competitive moto.”

Desalle, riding for Rockstar/Teka Suzuki in a guest appearance in the U.S., finished second (2-2) while Honda’s Brett Metcalfe, of Australia, rounded out the overall podium (5-3) that featured riders from three different continents. In his long-awaited return to American motocross, Yamaha’s James Stewart finished a disappointing 11th overall (3-35).

Dungey now holds a 111-point advantage heading into an off week and sits just one win away from tying 10-time AMA Motocross champion Ricky Carmichael, of Tallahassee, Fla., for the most wins ever by a rookie. He also leads the division in average finish at 1.9 and laps led with 144.

Since claiming his first overall victory last month, Canard has continued to win, capturing the overall for the fourth consecutive round. A patient effort in Moto 1 helped Canard pass his team-mate Justin Barcia late to take the opening victory. In moto two, Canard sprinted out to an early lead, holding on until the last lap before Kawasaki’s Christophe Pourcel, of France, made the winning pass. He settled for second in the moto to secure the overall win.

“I saw (Pourcel) down in the first moto and I was surprised,” said Canard. “Sometimes it happens and I just tried to do my best to take advantage. To walk out of here with a 16 point deficit instead of 38 feels great. In the second moto I made some mistakes and (Pourcel) was able to catch me but I knew I had the overall.”

Barcia finished second overall (3-5) with Kawasaki’s Dean Wilson, of Scotland, in third (6-3). After a crash resulted in a DNF for the first moto, Pourcel rebounded to finish seventh (38-1).

Pourcel’s advantage over Canard sits at 16 points. Canard holds the best average finish in the class at 3.9 while Pourcel has led the most laps with 101.

After a week off, the 2010 Lucas Oil AMA Pro Motocross Championship resumes for Round 10 and the Rockstar Energy Southwick National from Moto-X 338 in Southwick, Mass., on Saturday, August 28.

Results from round nine of 12 at the Unadilla Valley Sports Center on Saturday: