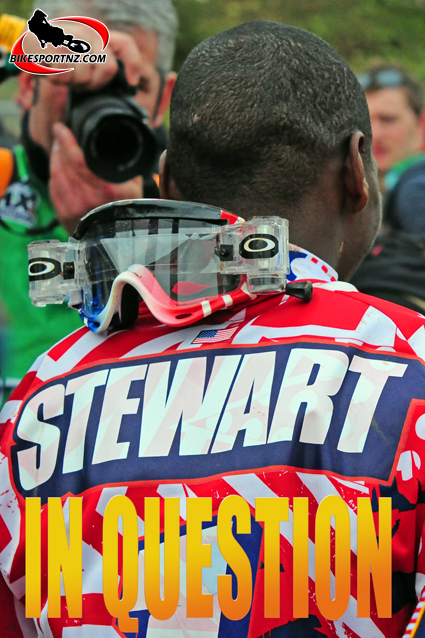 All eyes will be on Yamaha’s James “Bubba” Stewart next weekend.

After months of speculation, Stewart has revealed that he will be contesting the remaining four rounds of the 2010 Lucas Oils AMA Motocross Championship, starting with the ninth round of 12 at Unadilla, near New York, next weekend.

The top-rated Yamaha rider has been sidelined for much of this year because of a wrist injury sustained during this season’s supercross competition.

This will be the first professional outdoor motocross race Stewart has taken part in since winning the championship in 2008, which saw him win each and every moto, giving him a perfect season.

He stuck to the letter of his new “supercross-only” contract last season, opting not to defend the motocross crown in 2009.

The American Motorcyclist Association (AMA) will be watching Stewart closely at this event because this is also when the governing body will announce its Team USA line-up for the 2010 RedBull FIM Motocross of Nations in Colorado in September.

Stewart last raced for the American MXoN team when the event was staged in England in 2008.

Team USA did win the title on that occasion, despite a glitch in Stewart’s second outing – he stalled the bike while reading the race, couldn’t re-start and ended up finishing 23rd – which meant he didn’t win the MX1 class that day (French rider Sebastien Pourcel instead won the MX1 class at the MXoN in 2008).

Many pundits are picking the AMA will settle on Suzuki’s Ryan Dungey to ride the MX1 bike for them at the MXoN this year, Honda’s Trey Canard to take the MX2 ride and then it’s a toss-up between Stewart and Honda’s Andrew Short for MX3 duties.

Stewart himself had this to say on the subject: “I think Dungey should probably be the MX1 guy and Trey Canard or Jake Weimer maybe should be MX2, and then I think the MX3 class … If I go (out) there (at Unadilla) and I win races I’d like to have that spot, but if I don’t then I think we should give it up to Andrew Short.”

“We have some exciting plans for this year’s roster for the Motocross of Nations,” said AMA Director of Racing Joe Bromley. “The Motocross of Nations represents the pinnacle of international motocross competition, and we’re looking forward to fielding a team of riders that is sharp, prepared and dedicated to keeping the United States on top at this prestigious event. Unadilla, one of America’s true classic motocross facilities, is perfectly suited for making this announcement.”

The FIM Motocross of Nations is one of the most high-profile motorsports races in the world. It features teams competing by nationality for a combined score to determine the overall championship-winning team. The event emerged in post-war Europe in 1947 and has run uninterrupted since that time. The United States is the all-time leader in FIM Motocross of Nations overall victories with 20. Great Britain is second with 16.

The United States is the reigning champion of the FIM Motocross of Nations, winning over Italy and Belgium in 2009 in Franciacorta, Italy.

Currently, reigning supercross champion Dungey holds a commanding 95-point lead in the national motocross series in the 450cc class with only eight races (over four rounds) remaining this year.

The big question on everyone’s mind is if Stewart will have the speed and endurance to compete with Dungey who has won the last seven motos at the nationals.