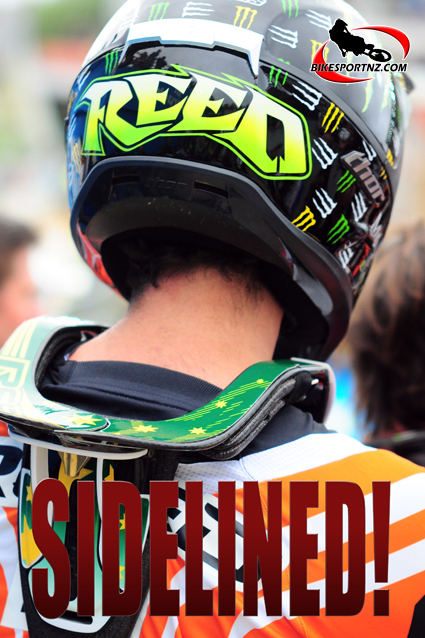 Chad Reed has been sidelined.

The champion rider has undergone test and discovered he has Epstein Barr Virus and will not now continue to race this season until the problem can be sorted.

Unfortunately, this is likely to rule him out from representing Australia at the Motocross of Nations in Colorado in September and from defending his Australasian SuperX crown in New Zealand.

The Monster Kawasaki rider entered the 2010 season hungry for championship success after winning both the 2009 AMA Pro Motocross Championship and 2009 Super X title but was sidelined for much of the Supercross series with a broken hand. Reed continued to train and ready himself to defend his AMA Motocross title but has repeatedly struggled with fatigue over the past few months.

Reed has often ridden through pain and injury — most notably at Detroit in 2008 where he broke his shoulder and fractured his collarbone during practice only to return to the track hours later for the final, but he admits this virus has taken its toll on him.

“I spent most of the last month in and out of my doctor’s office getting tests done, trying to figure out what is going on,” said Reed, the current AMA motocross No.1.

Knowing that I have worked hard during the week on and off the bike, each weekend I head to the race excited to get out there and get some wins on my Monster Kawasaki – ready to defend the No.1 plate that is on my bike. The team and bike are prepped and ready on race day and then I’m unable to race like I normally can.

“Where is the fight that I normally have? … For most of this outdoor season I have been frustrated and questioning every part of my program, wondering why I am unable to race to my full potential. It’s embarrassing riding with the No.1 plate on and not battling at the front. I don’t take it lightly, and I knew I had to get to the bottom of my issues.

“Many people have commented that it’s due to my role as a new dad, but that’s not it. Tate makes me want to race harder, I want my son to be proud of me and I want to teach him that by working hard you can achieve your dreams.

“People think that the passing of my friend Andrew McFarlane was another reason that I may not be riding to my full potential, that I’m keeping it safe. That’s not it either, I have always ridden within my safety zone and I know Andrew is up there pumping me up to get some holeshots and win some races like he always did.

“These two reasons alone make me want to race harder and give it everything I have, to be an example of hard work to my son, to live life to the full and be thankful for doing what I love to do, and that is race a motorcycle. I’m not ready for retirement. I want a few more championships indoors and out.

“So finally with all that said, I got my results back from the doctor, I have Epstein Barr Virus. I know some other riders have had it, and I never thought I would be sitting here saying the same thing. It explained my fatigue issues on the track. I knew it wasn’t my fitness, but I was struggling to finish motos. It just got to a point where it was dangerous for me to be out there.

“My doctor, team and I have decided that I need to be off the bike for a while to try get this handled. I am really disappointed to be out again. This year has been a personal worst for me. I have often been referred to as Mr. Consistent, but this year has been far from that.

“I want to apologise to my fans for not being able to race for you and I want to take this opportunity to thank you for your support and sticking by the No.22 this year. From the worst times, comes the best times, and I will be working hard to kick this illness so I can get back on track and to winning races as soon as possible.

“Thanks for your support and understanding at this time.”