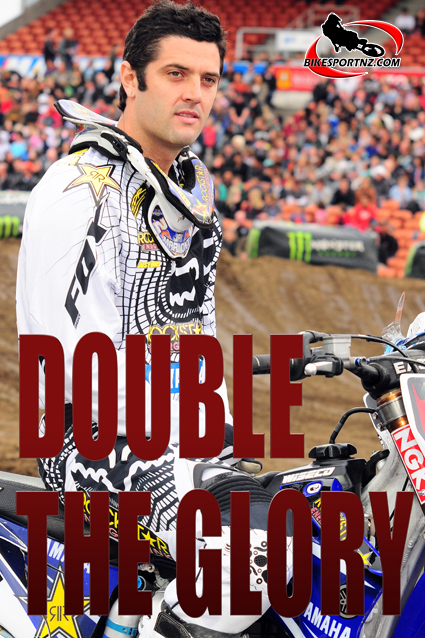 This weekend’s final round of the Australian Motocross Championships – which this year features a large contingent of Kiwi riders – will have double importance.

The final round of the 2010 Rockstar Energy Drink MX Nationals just keeps getting bigger with the announcement from series director Kevin Williams that this weekend’s round will become a massive double-header event.

Run over two days, the grand finale will now have a total of 150 points up for grabs meaning that fans get to see even more awesome racing as riders battle it out for championship glory.

One man certainly looking to win will be CDR Rockstar Yamaha rider and two-time Australian champion, Jay Marmont (pictured above), although he’ll no doubt have to be doubly concerned about the pace of No.2 man in the points, Honda’s Dean Ferris, and the No.3 rider, Scotland’s Billy Mackenzie (Kawasaki), and the No.4 man too, New Zealand’s Cody Cooper (Suzuki).

Marmont is currently leading the series and sits 40 points clear of Ferris, with Mackenzie just seven points behind him and Cooper just four points further back.

With the top five riders all within 54 points of each other, the championship title is still up for grabs.

As well as the addition of extra races, the series will also pay tribute to the late Andrew ‘Sharky’ McFarlane, who tragically passed away at the third round at Broadford.

The championship has introduced the Andrew McFarlane Cup – which will be awarded to the highest placed privateer in the Pro Open class.

Williams said the introduction of the award was just one way the championship could honour McFarlane.

“Andrew was dedicated to ensuring the competition was fair and safe for all riders – factory and privateer alike, and took his role as rider representative very seriously,” Williams said.

“With that in mind WEM have decided to honour his memory by awarding the Andrew McFarlane Cup to the highest placed privateer in the Pro Open class.”

The eighth and final round of the 2010 Rockstar Energy Drink MX Nationals will be held on Saturday and Sunday, July 24-25, at Coolum Pines Motocross Park.