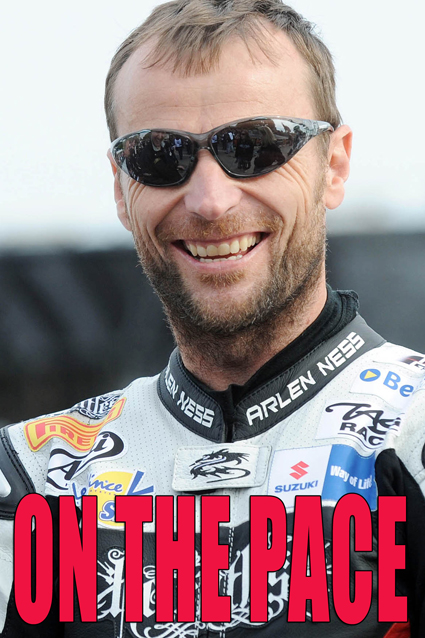 Kiwi Bruce Anstey and his Relentless by TAS Suzuki squad are now fully focused on the job in hand at the 2010 Isle of Man TT Races.

It’s an important year for the team, with Suzuki celebrating 50 years of racing and 25 years of its flagship GSX-R range at this year’s event. But already both antipodean employees are doing Suzuki proud – pushing themselves into the business end of the premier class leaderboard.

Donald, aged 32, is making a welcome return to the Isle of Man after missing out on last year’s race action due to a practice week crash, injuring his shoulder. The Melbourne native had the consolation of setting the first-ever 131mph lap around the TT Circuit just 12 months ago, and is already right on the pace in the Blue Riband Superbike class this year, posting the second fastest time on both nights.

Kiwi Anstey, was also in the ‘super-quick club’, posting the sixth fastest time on Monday night with a lap speed of 126.020mph, and in less than perfect conditions on Tuesday night, he set the third quickest time [126.919mph] behind his Relentless by TAS Suzuki team-mate Donald.

“I always look forward to the TT,” said Anstey.

“It’s my favourite race of the year and so far so good. The first two nights have helped me to get dialled in again and it’s all about getting the bikes set-up early to suit the circuit. If you can do that, the confidence builds and so do the lap speeds throughout the week.”