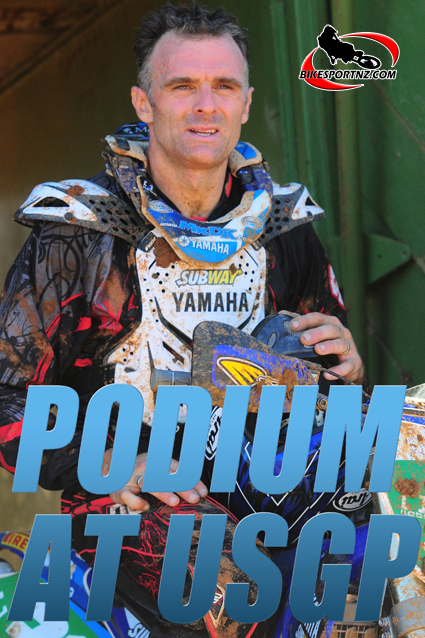 Kiwi Darryll King is back among the world’s elite … although it’s probably fair to say he never really left those ranks.

The Hamilton father-of-two – the 500cc motocross world No.2 in 1997 and 1998 — raced his way onto the podium at round three of the Veterans Motocross World Championships in the United States at the weekend, part of an incredible Yamaha 1-2-3 at the first US GP in 11 years.

In his first appearance in this year’s championship, King twice finished runner-up on the day to former American factory rider Doug Dubach, placing him on the second step of the podium and just ahead of championship leader Mats Nilsson, of Sweden.

The event, which shared the programme with round six of the MX1 and MX2 world championships, was actually the third round of six in the veterans’ series and now, buoyed by his success in the US, King has vowed to push on and contest the remaining rounds, in Latvia, Belgium and the Netherlands.

He did not race the opening two rounds because he was instead racing in the Australian Motocross Championships, the expense of mounting an early European campaign keeping him closer to home.

But the 42-year-old more than made up for his absence with two stunning rides at the weekend and, despite missing rounds one and two, he now finds himself 11th in the championship rankings.

“I had a fantastic weekend, the racing was a bonus,” said King. “Just catching up with all the motocross legends from the USA, along with the fantastic battles I had with Doug Dubach and World Champion Mats Nilsson was fantastic.

“I bought my own 2010-model Yamaha YZ450F from a local dealer mid week ran the bike in at a local track. Incredible really that I raced this stock standard bike to second overall in this Grand Prix.

“I came here to win and was not fazed by my second placing in race one. I knew that I could beat Dubach, the 17-time world vet champion, if I had another good start and used some of my tactics to pass him during the second race on Sunday.

“The track was watered heavily in the morning, just before our race, and I crashed on lap one while heading down a slippery hill. It was totally unlike me when there is muddy ground.  I just swapped the bike sideways and flipped through the air landed heavily. Fortunately, when I found my bike it was still running and I grabbed the clutch and took off, trying to make up the seconds I lost.

“I caught up to within three seconds from Dubach by race end and ended up second again.

“I had an excellent chance to win this Grand Prix and I did not take it.

“I will look at doing some of the Europe rounds later in the year and focus on the complete championship series in 2011.”