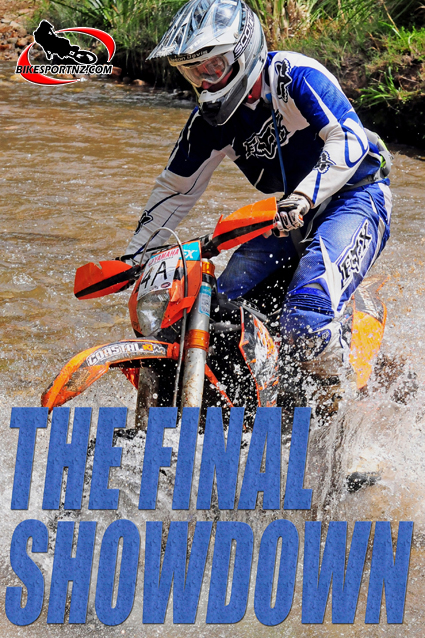 It is the final throw of the dice for New Zealand’s elite off-road bike riders on Saturday.

It has been a real see-saw battle all season in the premier experts grade at this season’s Yamaha New Zealand Enduro Championships and it all comes to a crunching finish at the fifth and final round near Taupo on Saturday.

But both Birch and defending national champion Rory Mead, of Whitby, have not raced all the rounds and this means it is actually Davis who is top of the expert grade standings, with an eight-point buffer over Auckland’s Karl Power, with Power’s cousin, Chris Power, not far behind him.

With just Saturday’s event near Taupo to wrap up the series, the 21-year-old Davis perhaps just needs to maintain his momentum to secure the outright title, although he will no doubt be pressured by Birch, Mead, the Power boys and possibly by Mokau’s Adrian Smith as well.

Smith has been impressive all season, racing either a 144cc or 125cc two-stroke Yamaha motocross bike against the 450cc four-stroke bikes of many of the leading riders. Smith is not in the running for the outright crown – he was forced to skip round three of the series because of wrist injury – but he will be a threat for honours on Saturday.

“The tracks are bulldozed, flowing trails, with plenty of bermed corners, so no long boring road sections,” said event organiser Gordon Maisey, of Taupo. “There will be tree roots, the odd log or two and hopefully we will start to get some good rain to make things a little interesting.

“The soil is pumice based, so can withstand plenty of water, without things actually becoming unrideable.”

Saturday’s venue is the Tahorakuri Forest, on Tetoke Road, and will be signposted from State Highway 5 on the Taupo/Rotorua road, just north of Wairakei.